San Diego movers who are fast and efficient and specialize in moving La Jolla and San Diego are here to help you have a great moving day. As a local San Diego moving company that has been in business over 20 years with A+ BBB ratings, our customers have confidence that they are getting consistent and efficient service. Discount Movers is proud to be one of the top rated San Diego moving companies in the area. Our movers in San Diego win numerous awards and are considered to be the best movers in San Diego with high ratings on Yelp, Google and Customer Lobby. Our local San Diego moving company specializes in local moving services, but we also pack and load and unload trucks anywhere in San Diego. Need a San Diego Apartment Mover? Our San Diego apartments movers will help you move into small and large units with all of the major apartment complexes in UTC, Gaslamp, La Jolla, Pacific Beach, Mission Beach, Miramar, and other dense apartment areas. Need a Gaslamp San Diego condo mover? Discount Movers is on the preferred vendor list at all the largest condo complexes downtown in Gaslamp for our outstanding service.We can also pack your home, or kitchen in moving boxes, and provide San Diego truck loading/unloading and San Diego storage moving services.

Established in 1996. Discount Movers is one of the leading, licensed and insured moving companies in San Diego, and has been moving San Diego for over 20 years. Most of our San Diego movers have been with us from 4-8 years, while others have been with our San Diego moving team for 10 and 11 years. This is highly unusual.Discount Movers has an amazing retention rate of our San Diego movers, which means that we know our movers well who are coming into your home and moving your valuables. All of our movers in San Diego are experienced professionals, excellent at what they do, and trained to be fast and efficient while protecting your valuables. Discount Movers is proud to have one of the highest repeat business/referral ratings in the San Diego moving industry. This success is due to our strong belief in taking great care of our employees and our customers. We offer the best value in town with cheap San Diego movers at price, but excellence in quality, speed, and experience moving San Diego California. 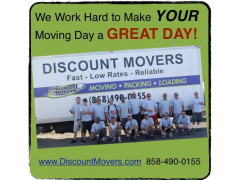 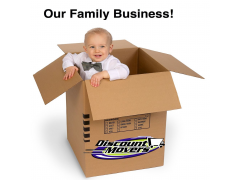 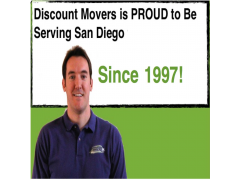 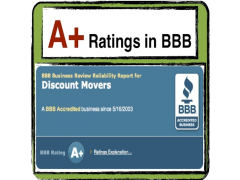 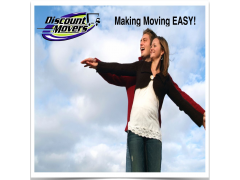 Free online moving quote calculator is light and easy-to-use, not requiring any specific knowledge from you. Everything you need is to specify the total size of your belongings, starting and ending points of your move, using additional services like packing/unpacking, etc. and send the request. Considering all the data you entered we make the accurate and precise calculation of the cost and delivering time and will provide you the results in 5 minutes. You can see information about other local and long distance moving companies in San Diego in our catalog.

Wow, is all we had to say at 1130am when our movers Mike H., Nick and Owen completed our 2 Bedroom (very furnished apartment) move from the 3rd floor!! To our surprise, they were done in 3 hours flat! We moved in the same complex just a different building and the 26 foot truck wasn't going to work, so they decided on the spot to use only the 3 Wheelers, and a few 4-wheeled wheelers to move everything else!! We were so impressed. There was nothing discounted about this move but the price!!Thank you to John for your straight forward quote and follow up calls and again to Mike H., Nick and Owen for their amazing service, professionalism, friendly attitudes and efficiency. We will be using you all again, so stick around for a bit!

I've used Discount Movers at least 4 different times, starting around 2010. They've always finished in the quoted timeframe and have cheap rates.The past two experiences, however, were less than satisfactory. Ashton was the mover in charge, and had a negative attitude from the very beginning. He complained, answered questions with a "leave me alone" tone, and had the other two movers doing more work than he was. During one of these two recent moves, my s.o. helped them unpack and they STILL complained about the job they were paid to do! Ashton moved slower than the others, but all 3 muttered grievances for the duration. They wrongfully made me feel guilty about my belongings; our things aren't especially heavy or difficult to move, and we followed all instructions for packing. Several years ago, the movers who helped me were friendlier and helpful. They even offered to move items that they don't typically take. During these past two moves, however, it was a stretch to get them to even complete the basic requirements of their hired job.This last move (7/9/2017) was the worst yet. Examples: They stopped at the store for drinks before unloading at our new place while 'on the clock'; They didn't take everything; They scratched a bookcase; They dragged items on the ground; They nicked a wall and plaster fell off; They stained the carpet with their dirty shoes, and we had to rent a steam cleaner last minute to remove it as an attempt to get our deposit back. As far as damages go, I know things happen, but there seemed to be a whole lot less care this time around. For this last move, I'd also requested four garment boxes. They did bring them. However, they filled one up with boxes. We did not realize this until after the fact. This was upsetting because then we only had 3 garment boxes available and not all of our clothes fit into them. We had to move some of the clothing ourselves, in addition to the other items they did not move for us, which was clearly not ideal - or why I hired movers. When we brought this concern up to Ashton, in a monotone voice he replied with a shrug, "You guys have a lot of clothes." To top it off, after they left, we found one of their precious garment boxes in our garage! They hadn't removed the boxes in it, either. To me, this showed pure laziness on their part.This was all pretty frustrating. However, the MAIN reason why I wrote this is as follows. Once the move was finished, we went to settle up with Ashton. Another mover was standing with Ashton as we were counting out the cash for the total. We paid the quoted amount, then gave all three movers $20 extra each as a tip. For clarity, this was less than a 3 hour move, with only a 1 mile drive between places. There were stairs on one side, but only a townhouse on the other. The 'bigger' items we have only include one bed, a couch, and 2 lightweight but somewhat tricky to transport glass cabinets. I Googled the appropriate amount to tip movers, with most results listing $5-$20 per mover. We decided on $20. HOWEVER, as the money was handed over, one of the movers complained! He said "we'd tipped $40 each last time" (which wasn't true). Ashton then said, "We killed it for you guys." In my opinion, no, they did not "kill it" for all of the reasons above. They also were very loud in our complex, so much so that we were afraid our new neighbors might complain (i.e., yelling at eachother from the alleyway through the upstairs bedroom window). They did the bare minimum with poor attitudes. My s.o. felt pressured to pay them, but we didn't have any more cash. So they followed him to the bank! Being a person who has worked in restaurants, I'm well aware of the importance of tips. However, I cannot EVER imagine asking anyone for a tip, much less asking for MORE of a tip. This was ludicrous to me. The amount tipped should reflect how well a job was done. In this case, $20 each was more than they deserved. I've mentioned what happened to several friends & family. They were all shocked by this behavior as well. Looking at the Yelp reviews, I see others have been hassled for tips too, and have also noted their carelessness & negativity. Even though my two poor experiences were based around certain movers, I now wonder how common my experience is. There is a positive side, though: Being very upset, I called the company. This was a Sunday, but John still got right back to me. He listened to what happened & apologized, also offering to refund the extra $60 we did not want to tip. John has been pleasant & helpful every time I've spoken with him. A few weeks later, I received a call from Jerry (the owner) offering to pay for our steam cleaning cost as well. I found this very kind, and much appreciated. John & Jerry seem to be a stand-up guys. Unfortunately I did not get the same impression from the movers I met during these past 2 jobs. Hopefully this will change after incidents like mine, and from other Yelp reviews w/ similar issues.

How do I begin ? Amazing! Discount Movers has the best group of guys ! They were on time, courteous, hard working and quick ! We bought a home in Hemet and moved from San Diego in the middle of a heat wave. I can't believe how these guys worked through that ! Also they were so understanding when they didn't record the escrow until late in the afternoon and we all were sitting around waiting to unload.  If you get the honor to get these guys you have won the battle of moving ! THANK YOU MIKE H, KYLE, MIKE V, CODY, NICK AND JAMES! You all rock !

These guys made my daunting task of moving from LA to San Diego a lot more bearable. My movers were James & Reggie and they were both equally awesome. They moved along quickly with a pleasant attitude the entire time. Given this was the cheapest moving rate I could find, I'm surprised by how great the experience was from beginning to end. I also spoke with both Jerry and John from the head office...I believe one or both of them are the owners. They seem to prioritize customer service which, in an industry I can only imagine is highly stressful, I very much appreciated.

We've used discount movers 3 times and will continue to use them for every move. They are respectful of your things and work hard to get the job done as efficiently as possible. Our movers were Kyle, George and Cody and they worked so hard moving us into a three story townhouse. The prices are very reasonable and they were able to accommodate our schedule.