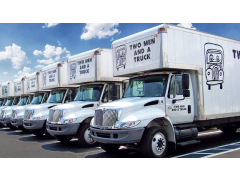 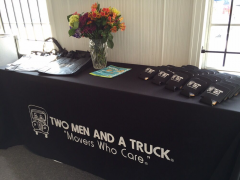 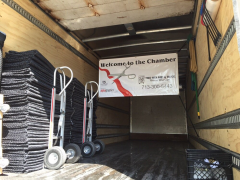 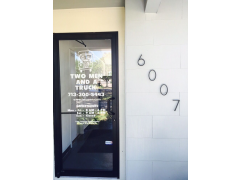 Reviews of Two Men and a Truck Houston Galleria

Not a great experience with these guys, would not recommend. They were nice and on time but job took much longer than it should have. They seemed unorganized and inexperienced. They broke some of my things and almost forgot a few things by elevators and on the truck. Again, nice guys but did not do a very good job.

Absolute terrible experience with this company. I'll share what I just sent in to the franchise headquarters:I recently had Two Men and a Truck move me from my old apartment to my new apartment.  The move was on 3/10/2017.  I had an absolutely terrible experience.  The two movers showed up at 9 AM to pack my two bedroom apartment and move it a mile down the street.  They began packing the house and after (4) hours or 1:00 PM, they decided to move me to the actual moving rate.  They had me sign a paper and then moved onto packing more. The house was hardly packed at the time of me signing the paper.  I thought they were pre-authorizing my credit card for the move, not changing the rate.  It was not explained to me -- basically "I forgot to pre-authorize you and you need to sign here."  About 9 hours later, or 10:00 PM they were completely loaded up.  Again, two bedroom apartment and 13 hours into the move, we're finally all loaded up.  We get over to the new place, a mile down the road, and they begin unpacking.  At about unloading, or 2 hours into the unloading, the guy comes to tell me the helper has injured himself and is en-route to the hospital and he was going to be doing this alone.  He then asked if we could help with the big items.  So, me and three of my friends go down and help him unload the truck and bring in ALL of the large furniture.  Almost immediately after all of the big items (beds, mattresses, couch, loveseat, tables, etc.) was put in the apartment, I notice the "injured worker" get out of a car parked at the corner of the street and wobble over.  He says he's sorry he couldn't help he was just give out.  So then he helps bring in the boxes, total of 41 boxes, I counted (which I paid for 50) and then they leave at 3:45 AM. 19 hours.  Bill over $2000.00Here's the good stuff -- I moved this exact move from Lufkin to Houston back in October 2016.  The guys came to my house in Lufkin at 8 AM, packed every bit of the things these guys had to, loaded it all up, and moved me to Lufkin.  By 8 PM that night, they had it all unloaded and was out of the house.  12 hours total, with 2.5 being drive-time between Lufkin and Houston. Now, this move with Two Men and a Truck, took 19 hours and I HAD TO HELP THEM UNLOAD.  If I wanted to move the heavy things, I would have just done this myself.  Now, my last move was just under $1500.00.  Again, from Lufkin to Houston Texas. This move, from Milam Street to Cleveland Street (less than 1 mile) was over $2000.00.  And, I had to help them unload the truck.Here's some of the notes I took while observing the movers the day they were working:- Didn't complete in a timely manner.- complained about personal life,- listened to loud, inappropriate rap music,- left dishes in dish washer, that I had to wrap and then pack,- had to help bring some little things they didn't pack in my own truck,- didn't have enough boxes, used 41 but ordered 50,- one guy keeps disappearing for long periods,- complained about how heavy things are and how tired he is,- it's 1:20 AM and one guy "I hurt my leg and can't help anymore"- wanted to stop the job altogether because he's hungry.I'll update this post once they agree to discuss working on this with me. For now, it'll stay.

BE WARNED THE REVIEWS ARE TRUE! I scheduled a move in July based on a previous experience with Two Men and a Truck that went well. The day of the move, I woke up at 5am to ensure every thing is ready for a smooth moving day unfortunately this branch of Two Men and a Truck slept in. I scheduled my move for a morning 9-10am slot. I needed to have my move completed by 1pm. 10am rolled around and no movers present nor a courtesy phone call to give me a heads up. The movers showed up at 11:35am. By 11:20am I couldn't wait for them any longer because there was zero chance they could get my items moved into my new place before I lost my time slot for the freight elevator. One of the movers I spoke to on the phone was a nice person but offered me a "off the books move" which didn't feel appropriate nor helped me in this situation. The customer service was fine but this Two Men and a Truck lacked professionalism to show up on time. We know Houston traffic is bad but leaving early enough to make it to a appointment is part of being a professional. Showing up 2 1/2hours outside of the window is a disservice to customers and rather than inconvenience them, this location shouldn't be accepting jobs they can't handle. I would never recommend this company to any one and if you are reading this and considering using them, I would highly recommend you don't. The reviews on here speak for themselves and I wish I saw them before I booked. Don't get bamboozled, there are a lot of other companies in the area with better feedback that won't waste your time.

I will NEVER use OR recommend this company to ANYONE.They low balled me a quote. It took 3 guys almost 5 HOURS to move a 1 bedroom apartment with all of the furniture taken apart prior to their arrival and less than 20 boxes. It may not have taken them that long if they weren't hitting on me and asking me where my boyfriend is and why I don't have one every 5 minutes. Speaking of hitting on me, they told me there wasn't room for me to ride in the truck with them but I could SIT ON THEIR LAPS. They repeated that line 3 times to make sure I knew sitting on their laps was an option. Being a woman BY MYSELF with 2 of the grown men hitting on me, made me feel EXTREMELY uncomfortable. I left a few things at my old apartment and one of the mover's insinuated that because I was leaving a few pairs of men's shoes behind, that he wanted to take them. The first thing one of the mover's did when we arrived to my new place was have a BOWEL MOVEMENT in my brand new bathroom, making my entire apartment smell terribly. They nicked and scuffed the walls in my apartment. One of them told my friend that she must have been smoking "good weed" before she came over because she coughed. One of the movers also told me if they wouldn't have had to do a move prior to mine, it would have gotten done more efficiently because they wouldn't have been as tired. I'm not sure why that should have affected their job with MY move.As I was unpacking everything, a lot of my things (especially my clothes) smelled like cigarette smoke. I don't smoke and don't allow anyone to smoke cigarettes in my house, so someone was smoking in the truck. On top of all of this, I called to complain and a woman told me that she was extremely sorry and would have the GM call me right away. It's been over a week, and I have yet to receive a call, but they made sure to charge my credit card for their "service". DO NOT USE THIS COMPANY!!!UPDATE: I just called AGAIN. I spoke to the manager, Chris. He told he gave me a discount on the price (which was very minuscule considering the amount I paid). He also told me he spoke to the guys and they said none of that happened besides the one using the restroom; therefore, there's basically nothing he can do besides hope it doesn't happen to anyone else and that he's sorry, but the next time I decide to move "I guess, just don't use our company." UNBELIEVABLE. Again, DO NOT USE THIS COMPANY.

Made moving easy! Got a call the hour before to let me know the time they were expecting to arrive. When they still hadn't shown up, they called informing me that their truck broke down and they had to get a new one. Even with this delay, they still arrived within the time frame I requested. Everything was packed up, transported 40 min away, and unpacked for a one bedroom apartment in just over 2 hours! We expected almost twice that. The movers were courteous and careful with my stuff, wrapping furniture in plastic and moving blankets. The entire process was extremely easy.