Central Houston residents can now experience the Art of Moving with Square Cow Movers. Whether you need residential, commercial or long distance moving in Houston, we'll be there for you. We promise 100% transparency, no hidden fees or quote adjustments.

Established in 2007. In 2007 we decided to move our families to Texas. It was a great migration. We packed up everything (including the pasture), buckled in the kids (because it's the law) and settled in the beautiful hill country.The move led us to develop the Art of Mooving. It's a new way to get you and your belongings from here to there in a pleasant, fun, safe and satisfying way. Our Austin movers aren't temps or subs, they're people we know and trust. We pack our own trucks, so your stuff is in the same capable hooves from start to finish. 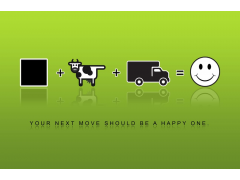 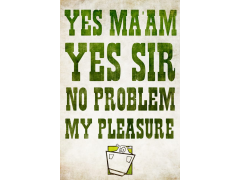 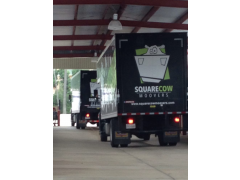 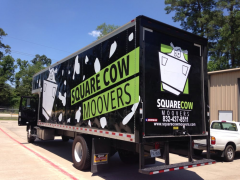 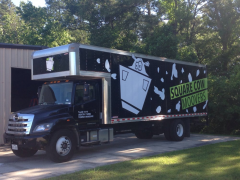 I chose them based on previous reviews and was not disappointed. Additionally, they were one of only two moving companies that replied with the information I requested. Everyone else wanted me to call. If you make getting rate information difficult, I can't imagine you will be a good contractor. I had to reschedule my move and they were very accommodating and understanding. They arrived on time, were very polite and professional, yet down to earth. I had three trucks full of stuff to move on a 100° day and it went very smoothly. They continually checked to ensure I was satisfied with the job. The price was very fair for the job size. I would not hesitate to use or recommend them to others. A+++

LOW-BALL QUOTE AND AMATEURS ON THE JOB.While my realtor suggested one company, I picked Square Cow Movers because SCM had far better Yelp reviews than my realtor's pick.  I AM skeptical about Yelp -- and will go with Home Advisor and Trip Advisor over Yelp --  but this time the comparison SEEMED overwhelming.  Man, was I wrong.Two good things to report two days into unpacking:  Nothing broken and the CL was very personable.  Their deficits follow.SCM did a great job of pre-day-of-moving [DOM] contact and confirmation.  Then, on the DOM, SCM's admin let the crew leader [CL] and me down.  The truck was supposed to leave SCM at 0800, and I got a call from the CL letting me know they were fueled and ready to leave.  I reminded the CL this was a full pack and unpack move.  His response was DUH, followed by "How many boxes should we bring?"  Had I not been committed to the move date, I would have bailed then.  WTF do I know about how many boxes it takes to empty a 2 BR 2 BA apartment?  I guessed what I thought to be on the high side, as I had recently moved family from a 4 BR house into a 2 BR apartment.  And, yes, they ran out of boxes.One more thing about boxes: I mentioned wardrobe boxes, which they brought.  What they didn't bring were enough hanger bars!  Wn entire closet of hanging clothes were bunched at the bottom of two boxes.Another issue: The $770 bid was based on a 3-man crew.  Only 2 arrived.  And the FINAL BILL WAS NEARLY THREE TIMES THE LOW-BALL QUOTE.  Buyer beware: Either they come out to scope the job in advance, or go elsewhere.The truck arrived around 0900, as expected, and by 2 PM the CL asked me if I was OK with the pace of the packing.  Hell No, as I'd expected to be unpacking by that time.  I requested two additional men be sent to the job at $50/hour as I had fantasies of going to bed by Midnight.  While the initial crew appeared to be working hard, they were very slow and the CL's helper was hopeless in packing.  SCM's web site makes a big deal of their "packing professionals".  The CL had some idea how to pack dishwater; his assistant put several dishes/saucers/china cups together in a single layer of paper.Now let's talk inefficiency: Two, three, and four men taking single items in each hand, waiting for the elevator, and walking to and from the truck?  No flat dollies or other gathering boxes!  I've WATCHED many moves in my 74 years, and these guys were clueless.  Midnight was looking like a fantasy.And, BTW, if you know you're moving two beds, your tool box has a variety of tools you might need to use.  Again, SCM totally failed.  A pair pf pliers and that's all??  My toolbox to the rescue, and the CL KNEW from my look he was going to get roasted.  Well, I'm a responsible Yelp, TA, HA, and social media poster, so I know better than to name names ion Cyberspace .  That said, SCM is waiting with baited breath -- they've emailed and called 4 times -- for the bad newsstand they're getting this via email as well as Yelp.SCM!  I WANT A 50% REFUND FOR THIS BOTCHED JOB.  YELPERS,. LOOK FOR MANAGEMENT COMMENTS.  MANAGEMENT:  YOU WERE KIND ENOUGH TO PROVIDE ME YOUR NAMES AND EMAIL ADDRESSES.Yelpers: I cannot advise you on who to do a local move in Spring,Conroe, Montgomery, or NE Houston, but do not consider Square Cow Movers.  Their professional-appearing web and post-sales presence might be comforting, but here is fresh, first-hand PROOF they do not have their act together.  Finally, in fairness to the CL, the SCM administration failed him.  I took the man's measure, and I like and respect him.

Movers arrived late, my dresser was damaged and I'm out for $200, but there's a reason I'm still giving them at least 3 stars.The movers were 20 minutes late, but in less than 5 minutes of calling Square Cow I was on the phone with John(manager I believe), who was extremely helpful. With most services being so computerized and automized now a days, I was shocked with the amazing customer service and understanding that he provided. It's definitely something you rarely get now a days. I should also add the movers were also very down to Earth and great guys - just late.Sadly my drawer that was handmade by father was damaged. Albeit it's a beautiful drawer, I still had a lot of respect for the movers honesty and integrity to tell me about it. He promised he would fix it with gorila glue, which they did,it just didn't work since the top of it also got hit and it no longer fits inside.Do I recommend Square Cow? Absolutely. They're friendly, fast, and have great customer service.But in all honesty, did my moving process leaving me somewhat disappointed? Sort of. I will say this though: I do truly appreciate how honest they were in regards to being late, damaging my drawer, attempting to fix it, and disassembling my headboard free of charge.

We're so glad we hired movers for our move. After calling about 10 places, this one had availability for a last minute booking (I mean we still called a week in advance of our move). We moved from a 1200 square foot apt to a two story townhouse. Our movers took care of our things and hustled throughout the move!  Even when we asked them if they needed a break they politely declined (it was a really hot day) and got our move done quickly. They also helped us disassemble and reassemble our furniture and unloaded everything to the appropriate floors. The quote is pretty accurate and they called a few days before to walk through a checklist with us.If we move again we'll def call them again!

These guys were a great moving company. I was recommended by both my brother and sister, who had both used them to move their families. I called all around town and they were one of the only quotes I got back that were a minimum of 2 hours, which is all I needed to move my roommate and I out of our townhouse into another. They were quick, careful, and very courteous of any specifics we had. We only intended them to take a certain number of furniture pieces, but they were so quick that we just had them take more boxes and our plants, which were carefully transported. We had three guys, all great and fast. They even worked in the rain, but they laid down blankets and were very cautious about getting any water or mud in the house.I will definitely be using them again for my next move (hopefully not for a while!)