For dependable Webster, TX Movers, Moving By Design is the only choice. We stress the careful handling of all property and will promise the safe arrival of your personal belongings.

Established in 2008. Family owned and operated since 2008 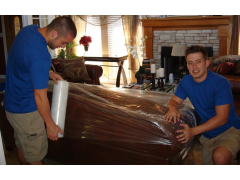 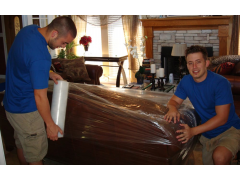 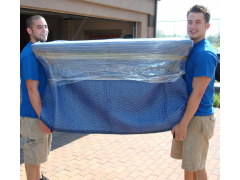 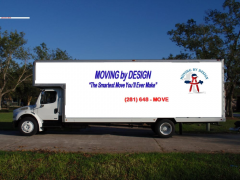 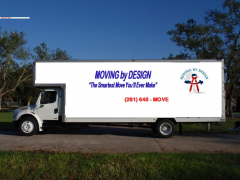 Reviews of Moving By Design

I. Cannot. Say. Enough. About. This. Company! We absolutely love Moving By Design. Christina, Marquis, James, Nick, Trenton, Erain, and everyone on the MBD team, I hope you find this review and know how much we appreciate all of your hard work! This was our second year using Moving By Design, and just like before they were punctual, courteous, and patient. We honestly couldn't have asked for more. The company is also a HUGE supporter in the community! If you're looking for a moving company, look no further, THESE ARE YOUR GUYS.

I am in a quandary as to how to rate this company. On the one hand, a lot of things went great, but we did have some pretty big hiccups in the process.For starters, I love Christina the receptionist. She was always so helpful throughout everything.We had a move from a 2 bedroom apartment in League City, pickup some couches and a fridge at my mother in laws down the street, then take everything to our new house in Friendswood.Scheduling was easy, and Tim followed up with us 2 days beforehand for confirmation.We had a window of 11-2 for the arrival, and the movers got to the apartment at 12. When they arrived, there were 5 guys sent because we were on the third floor, and they didn't want the job to take all day. Understandable, and great, because it did move quickly for the boxes we had packed, as well as the furniture in the bedrooms. That did not last very long though. After an hour past, 3 guys went to another job. Once again, understandable, but the pace at which we were able to get things down to the truck was almost halted because of the older man who was running the crew. He was very stubborn, worked at a snail's pace, and actually argued with my husband about what would fit on the truck. When 2:40 rolls around, we finish getting stuff into the moving truck, and head to my mother in law's house 5 minutes away. The movers said they wanted to go get a quick bite to eat and something to drink, so they would meet us there in a few minutes. I had to leave to pick up my son at school, but my husband stayed for the truck. They got to her house at 3:05, and proceeded to evaluate how it would be best to get 2 couches, a chair, and a fridge to fit in the truck. After I picked up my son from school and went to my house in Friendswood, it was already 3:50, and I noticed that the movers were not there. At this point I was getting upset, as it does not take professionals this long to get a few things. I called Christina to let her know the situation, and that I should not be getting charges for 3 men, because there were only 2 on our job. She was very nice, and informed me that another mover would be joining the crew for unloading at my home in Friendswood. While I was on the phone with her, my husband had text me and said my mother in law was furious, because while the movers were getting the fridge out of her house, they proceeded to let fluid leak out onto her new carpet, and didn't even offer to clean it or do anything to get it up. Christina let me know that her higher up, Tim, was going to be told of the damage. Around 4:30, the movers finally show up to my house, and proceed to unload the truck. The 2 younger men were awesome, and very efficient in getting things done. The older man was again, being stubborn. We told him that the fridge needed to go through the formal dining room side of the kitchen, but he proceeded to take it through the living room, and caused unnecessary stress on his crew, as well as wasted time. When he realized we were right, he took the fridge around to the dining room, and it took him over an hour to get it in the correct position and connected. That should've taken maybe 15 minutes. After he finished that, there were several pieces of furniture he kept trying to place in the wrong room, and it took me telling him the same thing 3 times for him to listen. The president of the company, Tim, came by the house while the movers were working, and talked with us about everything that was happening. He was very professional, courteous, and got my mother in law's contact information so he could coordinate getting her carpet professionally cleaned. We were very pleased with Tim, and glad he came out. After the move was all done, it was about 6:45, and the older man tried to hand us a bill for $735, and said it had a 10% discount applied. I'm no mathematician, but 5.75 hours at $130/hr and 10% off the top is $672.75. When I let him know that his math was off, he tried to argue with me for a minute, then called Tim. Luckily, Tim was very admirable, and took $100 off of the final price.Nothing was broken, or scratched while moving, which is great!We appreciate the younger men in the crew, Christina, and Tim very much, and would be happy to have them move us in the future.

I used these guys twice in a single month. The first house was a 3 bedroom loaded with enough stuff for a 6 bedroom house. We only used them for the larger items. It was completed within 5 hours. The second time was from a two story apartment going to a three bedroom home. We were done in 4 hours. Nothing was broken or missing. All smiles with speed and hard work. They worked just as hard from beginning to end. They helped disassemble and reassemble too.  Very honest. Enrique is a very good foreman. I wouldn't use anyone else. Thank you.

I met with Tim Gray so I could get a quote to move a house.  It was my childhood home, still full of over 40 years of stuff, and it was a mess.  Tim was kind,compassionate, prompt, and thorough.  Ultimately, I ended up not hiring them, but I feel that I would have been well taken care of it I had.

We moved from a home and storage facility to our new home.  They had to go to multiple locations.  They protected the floor, door jambs, and our contents.  The movers were very polite and respectful.  They were never on their phones, and worked hard the whole time.  Tim, the owner communicated very quickly to questions and even showed up the day of the move.  The total invoice for the move came in under the quote.  I highly recommend these guys and will use them again in the future.