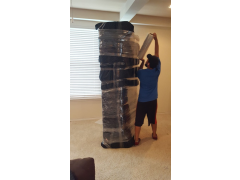 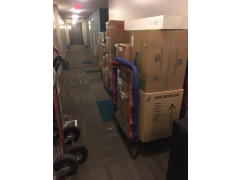 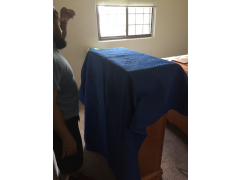 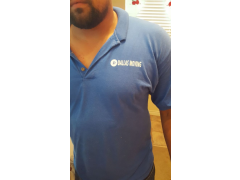 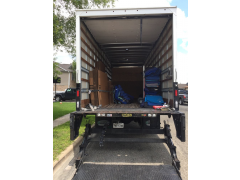 I'm moving to Missouri and I chose this company based on their excellent reviews and I am so glad I did. The reviews are accurate. The service truly is excellent. The office staff kept me in the loop about the team's arrival time and the crew that arrived followed through with everything that was promisedI highly recommend this company. Special thanks to Ron and his crew for a job well done.

Services Not Rendered.I moved from Dallas to California in November 2016 using Dallas Moving Expert. After receiving a quote from Dallas Moving, I contracted their services for my move. My total was $XXXX, the first portion I paid here via debit card (55% of the total with a 10% deposit) on 11/9/2016, and the remaining was demanded in cash by the movers prior to unloading on delivery day (they took $490 from me and did not give me change). The day before delivery, The Driver called me on the phone and told me he would be arriving the next day (Monday, November 14th, a work day for me). This was not very much warning. Also was very condescending and rude, talking over me. The Driver called me, and mumbling, he said, "This is blahblah with blahblah Movers." He paused. I said, "Which movers?", as I was still getting calls from other movers trying to give me bids. He yelled, "YOUR MOVERS!! DALLAS MOVERS!!" I said, "Okay." He went on with the call, but kept asking me questions, then talking over me instead of listening for a response. I did not complain about it in that moment, ask him to stop talking over me, or request a different moving time because I wanted to get off of the call so badly.On delivery day, the driver was supposed to come some time between 10 AM - 2 PM, but called at 10:09 AM to say that he would be arriving at 2 PM. The Driver texted me at 1:57 PM, saying, "2:30pm". At 2:19 PM, he said, "On your way?", without calling me. I responded that I was already at home. The driver showed up to my house at 2:40 PM. Some of my boxes labeled "FRAGILE, GLASS, PICTURE FRAMES" were crushed, but only 3 glasses and 1 picture frame was damaged. The plastic that my mattress was in was ripped open ($3000 mattress) and Dallas Moving had also added shrink wrap in an odd way around the middle, contorting it and the springs. My sofa table was brought into my new home damaged with two of its legs bent inward ($300). My dresser was left standing on its side in the middle of my bedroom wrapped in the mover's blankets and shrink wrap. My wood canopy bed frame, which has several large wood pieces that take two people to fit together, was left in pieces scattered around my bedroom. I cannot put this bed together by myself and I do not have anyone to help me, that is why I hired movers: for those few pieces of furniture that I could not handle by myself. Please remember that I just moved to a new state and I know NO ONE. I have no help, which is why I paid other people to help me. After the movers had placed my belongings inside the house, I watched them chat and smile outside as they folded blankets. The men who had done the physical work of moving had been very nice and careful. The man who drove the moving truck, however, was not as nice. The Driver (contracted, not good) came into my house holding the finalizing paperwork and asked me to sign the bottom. I asked, "Aren't you guys going to help me put the bed together, at least? I can't do it by myself." The man said, "No, we don't do that." I said, "But I thought that you did assembly and disassembly." The driver refused and refused. He told me to sign the paperwork so he could leave. On the signature line, I wrote "NO - Bed Not Assembled." The driver and movers left, and I immediately called the Dallas Moving manager, Olivia, who told me that she would get the men to come back and help me. I thanked her. Olivia called me back a few minutes later and said that the men couldn't assemble the bed because they hadn't disassembled it at my house, so they didn't know how to put it back together, and they didn't have any nuts and bolts. I told Olivia that I knew how to put it together and that I had all the nuts and bolts ready in my bedroom, that I just didn't have enough hands. I also told Olivia that I had hired the moving company in order to help me with these few big pieces of furniture, that I couldn't put the bed together by myself, that the movers didn't even take the shrink wrap off of my furniture or their own moving blanket off of my dresser. Olivia told me that she would call the Dallas Moving Operations Manager. The Operations Manager called me a few minutes later, and with The Driver on the line, asked me what was wrong. I explained the details. The Operations Manager asked the driver why he didn't help put the bed together? The driver said that he wasn't going to do it. The Operations Manager sounded frustrated, then he said he was going to talk to the driver separately and hung up the phone. They did not call me back, help set up my furniture, or offer to refund me any money for not offering the services they promised. The moving company already had my full payment before these events happened. DON'T RISK YOUR HEALTH FOR A FEW DOLLARS. GO WITH SOMEONE ELSE. Thanks, Dallas Moving NON-Experts.

Absolutely worst experience ever. 1. The quote was nowhere near the end price, in fact I ended up paying double2. Lack of communication and threats of keeping my stuff or making me pay again when I wasn't available on a moment's notice (during Christmas of all times, because yeah...people don't go visit family for the holidays.)3. They broke most of my dishes, damaged my washer and dryer, cracked my tv, my dresser & even lost my bed!!! 4. When I called to figure out insurance and where my bed could possibly be I was basically told tough luck. DO NOT USE THEM.

If there is a negative rating I would be more than happy to give. I made a completely wrong choice choosing Dallas moving experts to moved my household things from Plano, TX  to Manchester, CT. I should have read the reviews here before choosing them. You will get a link to view their videos. That's completely opposite to the service you get from these people. My stuff was picked up on Feb 3rd 2017, It was delivered in March 22 2017. Close to 2 months. I gave them my address only on Feb 18th but still it took more than a month to deliver. Once you pay the deposit and finalize the things with them they will treat you in a completely different way. You have to call them every other day to know when you will get your stuffs. You leave a VM no response. Basically you need to run behind them every other day to know the status. I was given false promises like you will get your stuff probably next week, your stuffs got picked up from Dallas its on its way all promises. I would have called the manager over there over 50 times for sure to know the status, everytime the manager will tell its on its way or not picked up yet, some problem with the weather, driver is not answering the phone or dispatch is not giving me the proper details or my day is hectic today I will give an update tomorrow. Thats not my problem. I am your customer and you are supposed to tell me the truth otherwise how you people can run a business like this? Full of false promises, when I shouted and asked for the driver number the manager did not give, I was told its against the company policy, this is a joke!!.. I called them every other day for atleast continous 4 weeks, finally I was given a driver number, when I called him he told me he does not have my stuffs and he is not going to come anyway near connecticut and I need to call the manager to know the things and I should not call him. Come on guys, are you playing with customers like this? I immediately called the manager, no answer and left a VM , till date I have not received a phone call to clarify the things. There is a guy called Ron.. He is the go to MAN in this company... he is the one with his team picked up my stuffs, he gave me his number when he picked up the things and asked me to call anytime. I thought how can I ask where my stuffs are with him, but I called him with no other choice. He immediately picked up my phone and got my details and told he would call me back in few mins.. He called me in ten mins and told I will get my stuffs on tuesday or wednesday (21st or 22nd of March). He told me to call him for any questions from the day I called him. As I said he is the go to MAN. He kept his word and I got a call from one of the local movers on Monday and they told my stuffs will be delivered on 22nd from 8-10 am. They came on time and delivered the stuffs. Ron and his team came on time and picked my stuffs quickly on Feb 3rd - Appreciate him and his team. Things are delivered without any damages. I would say the only trust worthy person in this company is Ron. He did a favor for me when packing as well. Very nice gentleman. So please think 100 times before choosing these people. I am not sure if you will get a savior like Ron for you but for me he kept this word. My employer paid for this relocation, since these people gave the lowest quote ($ 50 less than other movers) I had to go with Dallas moving """"experts""".. otherwise I could have picked other companies. Bad choice and I faced the problems. Ron - If you get to read this, thanks a lot for all your help!.Thanks,Santhosh

Choosing this company was a horrible mistake. They will compound you moving stress to a level you will find hard to recover from. They will come late, have too many problems and issues to deal with, increase the fee at the last minute and also damage your goods. I wish I had read some reviews before hiring.