Harrington Moving & Storage - local and long distance moving company in US. The company has been in business from 1996 and provides next moving services: 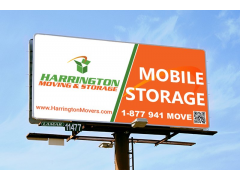 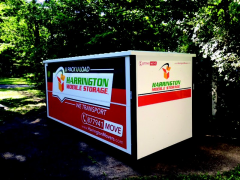 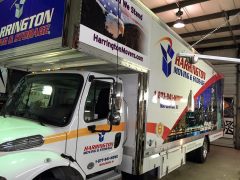 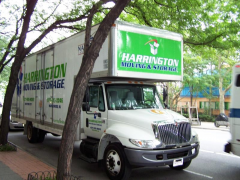 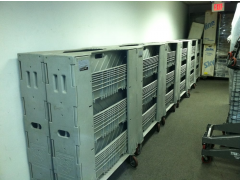 I had a bad experience with Harrington Moving & Storage. I dealt with everything from being overbilled, late movers, poor customer service, lost stuff, and pretty much anything else you can think of. Feel free to read the full saga below but if you're looking for a customer's honest opinion, I suggest that you pick a different moving company.We were moving out of Maplewood and were in the process of finalizing our house purchase in another town. We were a little behind with planning and wanted to have someone who could do things quickly. I called the company and they had Irv swing by and do a look-over. We were quoted a pretty high price ($1,900~) for a 2 bedroom, 2 bathroom apartment. The price included a month of storage, all fees (to and from), and a set amount of hours. We were in a rush to get everything done and accepted. We proactively did a bunch of packing to make everything as easy a possible for them.The movers arrived on the scheduled date and packed up the remaining items/moved the boxes we prepared. All in all, they were good - they worked pretty efficiently and got everything in truck without too much trouble. However, when I got the bill, there were a couple problems:1. they rounded up the time spent - even though they ended about 15 minutes into a new hour, they billed me for the full hour 2. I was being charged a higher rate for more people than originally quoted ($150 per hour vs $200 per hour for 3 people vs 4 people)The total was around $1,800 and, at the time, I mistakenly assumed this was the price for the whole move (not just the pickup). I signed and the guys left. I reviewed the bill more carefully, identified the issues listed above and contacted the office. I focused on resolving the increased hourly rate/extra person as that seemed to be the more costly issue. I was told that that apparently the building's superintendent communicated to the movers (in Spanish) that someone had to be by the truck at all time. I checked with my superintendent who said that never happened. Given that they never cleared this by me, I was pretty unhappy. After a lot of back and forth with Jeff (owner), I got them to stick to the original quoted rate and had them remove the cost of the extra truck person from the bill. Several weeks later, we were ready to schedule the delivery/drop off. I requested a date that was within the original month of storage I paid for but was told that it was unavailable. I was also casually informed that (as a result of this) I'd need to pay more storage fees. After I pushed the owner about how this was unreasonable, he said he'd do me a favor, sarcastically saying something to the effect of "I'm don't have to make money, I'm rich enough."The morning of the delivery, I was called and told that "truck broke down". I was told they'd be an hour late. After an hour, I called them for an update and told that they're repacking the stuff to an new truck but would be there in an hour. We played phone tag for a while but ultimately, they ended up being between 4-5 hours late. The moving crew got lost (even though my directions to the new house were fairly straightforward). When they did arrive, I learned they were planning on charging me extra costs for travel time (even though this was already included in the original quote). We called Jeff who OK'd skipping the charge but communicated there would be no compensation for the lateness. He did say that he added a free extra guy to help unpack as a goodwill gesture but I can't say it really helped at that point. Sure, maybe it would have been even slower without him, but I was originally quoted a price for 3 people and it's not like we got extra stuff for them to move so there was clearly a disconnect somewhere?Anyways, the movers were in a rush as I guess the owner told them to only spend a set number of hours this time around. Even with the 4th person, they didn't actually finish everything which was annoying. I'm not sure how the accounting worked out but I ended up paying about $2100 for the whole move (+ tips). While I wasn't happy that we couldn't stick to my quote rated, I just wanted this to be over. All in all, the whole experience just felt shady but, unfortunately, there was more disappointment to come.When I started unpacking boxes, I saw that the handling process on their end left much to be desired. We had broken glasses and other damaged items. Our desk was falling apart and the wood was cracked. The mirror which we attached to our dressers was no longer attachable as the screws were missing. I elected not to pursue any further action for the damaged/lost stuff. Their standard policy was something like $0.60 per pound which didn't seem worth it. There was an insurance policy which I declined due to the fact that would have increased my cost by about $160 and had a $500 deductible. I can't recommend using Harrington Moving - sure, they moved my stuff, but boy were there issues in between!

I tried to get estimates for my long distance move from NJ to FL, and reached out to Harrington, based on their good Yelp reviews here. Unfortunately, all I ever got was a pre-canned automatic reply from Amanda Hecht at Harrington, redirecting me back to their website. A follow-up email to her direct email address resulted in no reply whatsoever.Not a good start; needless to say I went with another company.

We had a wonderful experience with Harrington Moving when our office relocated in September 2012. The movers were professional, courteous, and handled our items with care. We were so pleased that numerous staff members have referred friends and family to Harrington Moving & Storage (all with positive results). We give our highest recommendation of this local business! Sincerely, Jennifer Griola Executive DirectorSusan G. Komen, North Jersey AffiliateSummit, NJ

AVOID! I waited for 40 min before calling to find out where they were. The reply I got was, "They are running late, they didn't call you? I asked them to call you. Let me call them and call you back" Then one of his guys calls me and says he is running late. How late I asked, he says 10-10:30 (they were scheduled for 8:30!) They were also very unprofessional and impolite

Great experience! Great guys, fast, neat & very nice. This is the third time we used them. Would recommend highly!!! Thank you Jeff!