We offer affordable professional moving services in Glendale, Pasadena, Eagle Rock, and Burbank areas. We are a local, family operated company with a simple goal in mind: to provide excellent service at lower rates. All of our movers are well trained, friendly, and courteous. We offer the following moving services:Local Moving ServicesOffice and Commercial MovesLong-Distance Movers within CaliforniaLabor only movesSub-zero, Viking appliances movesPiano and Grand Piano moves

Established in 2009. Wonder Movers Glendale were established as a small partnership between two co-workers of a larger moving company. We've started with an old 16' U-Haul truck, but after several years expanded our professional services to a fleet of modern, fully equipped trucks. We are a mediums-sized moving company with an accent on local residential and office/commercial moves in Greater Los Angeles Area. Despite the fact that we are located in Glendale, we service all adjacent areas such as Burbank, Pasadena, Eagle Rock, Studio City, and the rest of Los Angeles.As of 2016 we employ almost 50 workers. We pride ourselves for keeping long-term relationship with our employees in order to provide service excellence to our customers. Be believe that lower turn-over rates among the movers inevitable lead to better, quicker and safer service. All of our professional movers are properly trained and provided a variety of tools to maximize the efficiency. Hire the Wonder Movers and enjoy! 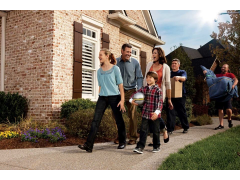 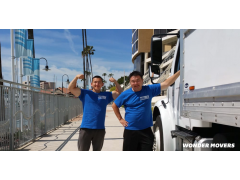 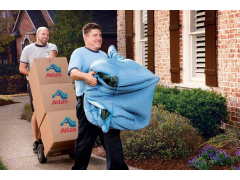 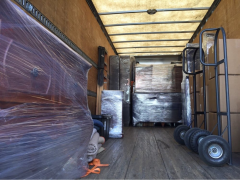 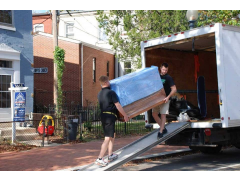 We just had a move on Saturday and completely satisfied! They confirmed the day before, called the day of and were on time! Super professional!It was well worth the money to have a reliable and professional company move your items, price was as quoted no hidden costs. We would definitely use them again for any future moves. Highly Recommend them!

A few days prior to president's day weekend, my husband and I began our last minute search for movers to help us move over the holiday weekend.  We did tons of research in a short amount of time, and even called places that advertised to be only $59/hr (but had tons of hidden costs).  We felt Wonder Movers were the most honest, straight forward, and easy to work with company that had no hidden costs.  We had a pretty complex move as well, with half our furniture going to downtown Los Angeles and the other half had to go to my parents' home in West Covina.  Arnie and Denny were both very professional, arrived early, worked quickly, and made sure all our furniture was dissembled, wrapped up and protected, then reassembled in the way it came.  We will be moving again soon so will use them again!

I was behind The-8-Ball.     Under-The-Gun.     Age, advancing years have finally, finally caught up to me.     The specifics of my moving story were and are as follows:     I'd given notice, i.e. 30 days, had found a beautiful place to live - facing north, the mountains, an incredible balcony - the apartment-of-apartments.     That's the good news.     The bad news was I'd way-underestimated my abilities at this stage.  Thought I could figure-the-move-out and by myself.  It's just a move, right?  You pick everything up, put it in a truck, and bring it somewhere.  It's that simple, right?  Wrong.     I'd imagined I could power through the move myself, do everything, lift everything, know how to separate, what should and shouldn't come, etc.  Except the pressure starts to hit when you wait until Day Seventeen - (of the 30 Day Notice).       I'd made a second mistake, error.  Having had a production and producing background, i.e. music videos, Toyota commercials, student films and shoots?  I thought, hey, why not just PRODUCE the damn MOVE myself?!  Hire some strong, hard-working Latino-dudes known to hang-out at a local U-Haul - I even interviewed a few - liked them.    Okay, here's where the review BEGINS - and also where it gets dicey.1.  I'd let time get away from me.2.  I underestimated the time it'd TAKE - only the true pro's like WONDER MOVERS are capable of assessing your move - which was and is WHY "Wonder Movers" sent Tim over - and to help me guess-timate.  That alone calmed me down, helped save the day.  So that when Ross and Bek arrived?  The two-man team that WONDER MOVERS had assigned for the day?  It was a home run.  Like Tim?  Ross and Bek are Supermen.3.  I hadn't broken job down into sub-goals and sub-tasks.  Once WONDER MOVERS and TIM came onto the scene?  It was explained where my confusion lie.  There were numerous sub-goals, sub-tasks.  Tim explained that bagging and boxing EVERYTHING could save me up to 200 dollars.  SAVE me.  Tim was looking-out for me - as was John and Bill - two of their great front office people.  At no point were they trying to be anything BUT honest, decent and fair.  I got that feel and vibe almost from the jump.  So did two people I have a lot of respect for, our great apartment manager and great landlord.  They were impressed with Tim, impressed when I told them that WONDER MOVERS would come in - save the day.  One of the sub-goals was probable-storage - something I'd wished to avoid - and there was also good news here - the invaluable Jim Darr and Staff over at "Crescenta Valley Mini-Storage."  Using these two companies IN CONJUNCTION with one another is highly-recommended.  ESPECIALLY if you're in the La Canada, La Crescenta, Montrose, Sunland, Tujunga areas.  Both excelled and from moment one.WONDER MOVERS and their front office took over from this point forward.  They knew I was overwhelmed, that I'm an older dude - and that moves are just NOT most people's strength.  How could it be unless we're professional movers or professional storage companies - these people write-the-book on moves.  The issue, at least mine - was trying to save on costs - forget trying to save - it's just not worth the hassle when there's a WONDER MOVERS.John, Bill and Tim (I'll be back with two more names I'm neglecting) were patient, flexible, weren't going for "the close" or a lot of money - they're so popular in our area their work and job orders are numerous.  They don't need you - you and I need WONDER MOVERS.WONDER MOVERS come in, advise on costs, time - sub-goals and tasks, i.e. when the job order will be executed.  You breathe a sigh-of-relief.  Then marvel as they work, as they actually come in and make mince-meat out of something that had intimidated and overwhelmed you.    WONDER MOVERS didn't charge for Tim coming-over, spending time explaining what my end/role needed to be (having everything boxed, bagged, ready).  In addition this advice SAVED me even more time/money.  That's what they do, this is why they're the best, this is why they'll hit 100 outstanding Yelp reviews by mid-June.  WONDER MOVERS are never, ever NOT excellent - not outstanding - this is five-star group of people and business.  WONDER MOVERS was prompt, reliable, dependable, confident, helpful, kind, patient - the kind of customer service that needs to be applauded and from first contact.WONDER MOVERS are ruthlessly-flawless, almost Zen-like once they begin your job.  You won't BELIEVE how quickly a team of two or even three WONDER MOVERS will make your headache go away.  I stopped taking ALEVE the moment I called WONDER MOVERS, that's the highest recommendation I can give a company.  Exemplary attitudes, all good-looking, buff, classy guys - I can't say enough about this outfit.  Thank you WONDER MOVERS for getting me to my new place and just under the gun - wow - will never forget it.For companies like WONDER MOVERS Yelp should have a special six-star category.

It was super easy to book using their online quote form. I received timely responses to my questions and I was able to put down a deposit online. Communication was excellent. I received an email and a text reminder the day before, and on the morning of the move, the guys called about 25 min beforehand to let me know they were on the way. They showed up exactly on time and after looking over our place, gave us an estimate based on the amount of stuff we had to move. Despite the 100+ degree heat, they were nonstop (except a short break for lunch which they deducted from the overall move time), had endless energy, and were efficient and courteous. The move did end up costing more than I expected but that's because I didn't realize how long it would take to load all our stuff, plus we ran into traffic on the way over to the new place. Next time I will go with 3 movers instead of 2. It's a higher hourly rate, but overall it would have saved us money due to a shorter move duration. Thank you to Abe's team for your hard work!

Wonder Movers are great! I got a recommendation from neighbors who used them for their move. They arrived on time, worked hard and efficiently. The price was exactly what I had been quoted over the phone. No hidden charges. They do a wonderful job. If you are looking for honest, reliable movers, call these guys.