Having completed more than five million moves, Two Men and a Truck® is the nation's first and largest local franchised moving company in operation with the goal of exceeding customers' expectations every day. Nationally the brand employs more than 8,300 team members. You'd never know it because a small-town, friendly feel is what the brand embodies--all while setting the industry standard for professional and personalized service. Move teams are able to handle any type of move: business moves or home moves — whether it's an entire corporate headquarters or a single piece of furniture. Flexible schedules are offered in order to meet customers' needs, with availability on evenings and weekends. The expert move teams are fully trained, licensed, and insured. Our top-notch movers work hard to live up to their reputation of being the «Movers Who Care®», and with a 96% customer referral rate, the success of Two Men and a Truck®'s secret sauce is apparent to their millions of happy customers! 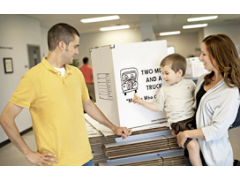 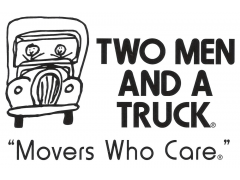 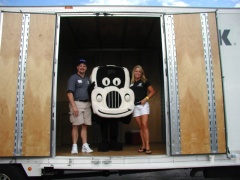 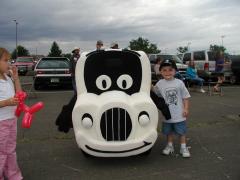 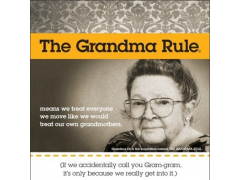 Reviews of Two Men and a Truck San Antonio West

Every aspect of the move was great.  The customer service is amazing.  I was called several times to verify the time the movers were arrive, I was called during the move to make sure everything was going well and I was called after the move to make sure I was satisfied.  Companies now a days do not do that anymore.  The three guys who moved us were great.  They hustled and did our move in 4 hours!  No major damage to anything.  We will definitely use them again and recommend them to anyone moving!

Look elsewhere! We had everything pretty much packed and ready to move, besides the "big stuff".  They took about 6 hours to move our stuff from one house to another about 5 miles away. They damaged so many of our things, and the walls in our brand new home! After signing a damage report, we were assured that a manager would be contacting us first thing on Monday. After a week of no phone call, we called to follow up and the person in the office had no idea that a manager was supposed to contact us. She took our information, and again assured us that a manager would call.  It will be 2 weeks on Saturday, but I don't believe we will get a call by then. If you cherish your items, DO NOT HIRE THIS COMPANY!

I had REALLY bad luckwith a moving company a year ago and was soooo nervous to find movers again. As ridiculous as this sounds.. I picked Two Men and A Truck because their boxes were featured in the movie Limitless. When he's about to jump off the balcony.. all the moving boxes behind him are Two men And A Truck.. (Genius marketing ploy). So I called, they were professional,  reasonable rates so i booked them.  The "Two men" were great, friendly, nice, quick and had all their teeth (you have no idea what ive seen in past moves). I will use them again and definitely recommend them!

The guys were on time, friendly, professional, and fair. When we realized they had forgotten a chest at my apartment, they went back to get it "off the clock" so I wasn't charged for the extra time. They also took off appropriate time for breaks and charged me for only the time they worked. They worked consistently, and at a good pace. Even so, the move took twice as long as estimated, so my only tip would be to double the estimate they give you to get a more realistic idea of time and cost. I would assume that is good advice for all moving companies, though. Their office staff was great and checked in on me the day of the move, and the day after to make sure everything went well and I was satisfied.Overall, great experience, and I would recommend them to anyone.

Broke my TV, scratched up a dresser, stained carpet, left their plastic wrap behind, left furniture covered in plastic wrap, didn't put boxes in room they were labeled, took forever, witnessed boxes fall off the truck and they told me it was no big deal. No response from main office when I called to complain. Absolutely the worst move of my life.