Here at Evolution Moving, we have studied the moving industry and evolved its' techniques to create a simple, stress-free experience. We offer simple and fair prices at an hourly rate that won't leave your head spinning. We like to think of moving as a science; that's why we hire college-educated and former military professional young men to help with your move. Our team uses the best equipment and furniture protection available to ensure the safety of your possessions. The quality of our service promises to go above and beyond any moving service you have ever experienced. Our coordinated sales team will help you prepare for your move by keeping you informed and providing helpful packing tips designed to save you money. We stand behind our 5-star reviews and strive to make every move a success. We are moving Evolved!

Established in 2014. Our family created Evolution Moving to serve as the solution to fix what is one of the most under-disciplined service industries. Our mission is to change the way people perceive movers and moving companies. We strive to operate ethically, honestly, and make every effort to make your move a success. By hiring Evolution Moving you are supporting a family business that cares about its' clients just as much as its' employees. We are proud to pay our employees a fair and livable wage at more than double the industry standard in order to provide the highest level of customer service and quality of mover to our customers. Let us show you how we can be there when you need us the most. Thank you for taking the time to learn about and consider our company, we promise not to disappoint. 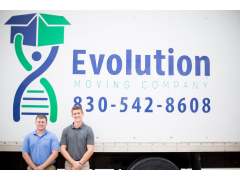 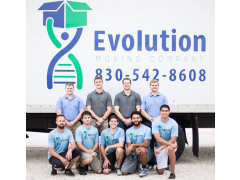 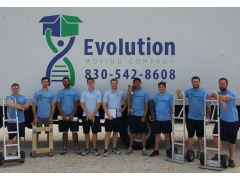 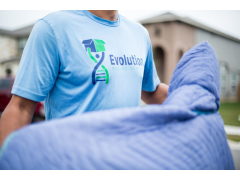 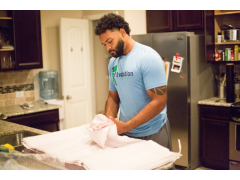 I am a former Naval Aviator, retired American Airlines Pilot, and current USAF Civilian Simulator Instructor Pilot. We moved from Rte 281 North and Bulverde Road area to Converse Texas on April 30, 2022. Being prior Navy, I have allot of moving experiences! This wasn't the worst but it was very sad, indeed. THIS IS THE MOST UNPROFESSIONAL, DISHONEST AND LAZY CREW I EVER EXPERIENCED IN 40 YEARS OF MARRIAGE AND A NAVAL SERVICE CAREER!
THE COMPANY HAS NOT RESPONDED TO ANY OF SEVEN MESSAGES LEFT WITH VARIOUS CONTACTS FOR A WAY TO REPORT DAMAGES, OR OFFERED IN ANY WAY TO MAKE THINGS RIGHT! I AM REPORTING THEM TO ALL LOCAL AND NATIONAL MILITARY MOVING AGENCIES ON AND VIA LOCAL MILITARY BASES!
1. The pictures of the handsome movers? That's a joke; expect less.
2. DAMAGES: The workers caused damages upstairs and in the stairway of this 3,000 + sq-foot house. To make matters worse, THEY INTENTIONALLY HID THE DAMAGES WHERE THEY COULD! They mis-positioned a guest room bed (we have 6 bedrooms) to hide the tremendously large gashes in our wall. They also put the bed together shoddily and incorrectly, where the uninstalled bolts and uninstalled center support bracket could not be seen until well after they left ... days later; same with the damages. A reputable company would have admitted they couldn't figure how to put the bed together, requested help, and come and reported accidental damage.
3. ALL boxes were meticulously labeled by rooms. Many were just thrown into inappropriate rooms, many requiring re-positioning but, being 66 and my wife being 64, and me being a disabled American Veteran, we had to employ help to re-move things within the house.
4. ALL boxes with fragile, crushable or non-bendable items were appropriately labeled with purchased labels! We found many damaged, crushed, collapsed by placing heavy boxes atop of them, etc.
4. LAZINESS / FALSIFIED RECORDS / LYING TO THEIR SUPERIORS / TIME + PRICE GOUGING:
A- I was quoted a price per hour. Cameron, the agent, said the move should be accomplished within 3-4 hours; but that part I haven't yet found in writing. Downloading voicemails and texts with our attorneys. THEY TOOK OVER 12 HOURS ... BUT THAT'S NOT ALL ...
B- THE MOVERS STOOD AROUND TALKING ON CELL PHONES AT TIMES. ONE GUY STOOD IN FRONT OF MY DAUGHTER AND TALKED FOR 20 MINUTES TO A FRIEND! WE CAUGHT THEM DOING THE SAME INSIDE THEIR TRUCKS! (They have NO idea I have videos / recordings of them joking around.)
C- I was at the house we were moving from, a nearly $500 K house (so the workers smelled money proverbially I guess) and my wife was at the new house with my daughter before me because truck 3 they only needed two) was still being loaded. I found out later that ALTHOUGH THE COMPANY TOOK 15 MINUTES OFF OUR BILL FOR LUNCH (BUT WE BOUGHT THEM LUNCH AND DINNER AND THEY ATE ALLOT LONGER THAN THAT) AND THEY CHARGED FOR THE 35 MINUITE TRANSIT BUT BOTH MY WIFE AND DAUGHTER WILL TESTIFY, WITH VIDEO, THAT THE TRUCKS SAT DOWN THE STREET, BACKED INTO A SIDE STREET, WAITING FOR THE THIRRD TRUCK, FOR AN HOUR AND 35 MINUTES!!! I DID NOT KNOW ABOUT THIS OR THE PHONE CALLING UNTIL AFTER THEY WERE PAID!
D- Not only did I pay almost $5,000 when the bid was for $2,500-$3,500, I gave them as a group a large tip because I did not know abo0ut ALL he sky-larking laziness, phone calls and parked hidden time, etc.
E- One manager called once to return my first call, and since they've gotten my written and verbal reports, nobody at the company will return calls or emails, or send us damage claim paper work! SO OFF TO COURT WE GO IN SHORT ORDER.
DO NOT EVER USE THIS SHODDILY RUN, UNPROFESSIONAL DISHONEST AND SCAMMING, IN ALL IN MY OPINION, COMPANY ... EVER!

PS: WE HAVE PICTURES, VIDEOS, ETC. BUT SINCE THIS MAY END UP IN COURT, WE'RE NOT SHARING ANY EVIDENCE AT THIS TIME. ALSO, ACTIVE COMPLAINT WITH BBB; HOPING TO SETTLE BEFORE HAVING TO TAKE TO COURT.

AMAZINGLY AWESOME!! I wish every company would take their business cues from Evolution Moving Co. From beginning to end, this entire experience was wonderful for us. Ryan was so sweet, patient and easy to book with. Then came the move...I've never seen 2 guys work so hard, fast, and efficiently anywhere, ever. Robert and Daniel were kind, patient, REALLY HARD WORKING, and man, were they fast. This was a pretty difficult move - lots of mostly beat up stuff moving out of a smaller grimy house to a bigger home - with a cramped entry and stairs. Oh, and I needed all this big stuff moved within 3 hours Max!  Somehow, and I'm still trying to figure out how, they got it done. And there was no damage to anything. There were a couple of things they really should've charged me for and they refused to do it. I know there's other companies that promise these rock bottom rates and tons of experience, blah blah blah...don't fall for the gimmick. Give your business to the company that not only shows they genuinely want your business, but also really deserve it. I'll be using them again to get my piano at some point soon and I'd highly recommend them to anyone.

These guys are amazing. Matthew and crew did a solid for one of our customers who was in a bind!!! Thanks so much!! You rock!!!

With very little notice, Evolution Moving was able to work in our move.  All the guys had great attitudes and were more than willing to accommodate any requests we had.  The young men were most respectful; making it a delight to have them around packing up our home.  The only reason I didn't give them 5 stars (but would given them 4 1/2 starts) is I found a few small things that weren't done correctly but they were very minor considering the overall move.  Now, I actually laugh about one of them...about three days after the move I was unpacking and found some bananas in a box.  Thankfully, they were in a box with kitchen items that were unpacked early on. Also, a couple of cabinets were not packed, but when I noticed it the day of the move they packed them up quickly before loading began.  When they unloaded, if I requested any piece of furniture be moved to a different room, they always complied.  Again, they were able to fit us in with little notice in a city with lots of people moving into (New Braunfels, TX) so I have no hesitation whatever in highly recommending Evolution Moving!  Thanks, guys!!!

I'm pleased to report we were very impressed and pleased with the job Lewis and his crew did. We haven't found a single bit of damage on anything and that is very rare with a move. We always resign ourselves to the fact that something will happen to one piece or another but we were pleasantly surprised!Everyone from Evolution Moving Company was extremely courteous and mannerly. We heard no off-color language, everyone wore a smile and each one treated our things as if they were their own. They also moved with a purpose without sacrificing care for speed. Compared to other movers I've used in the past I felt the price was reasonable. I was very impressed with the way both Ryan and Matt called in advance of the move to confirm the day and time. Communication is key with me and I greatly appreciate it.We will strongly recommend Evolution Moving Company to anyone we know of planning a move. They truly are a cut above!