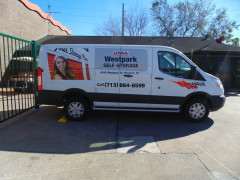 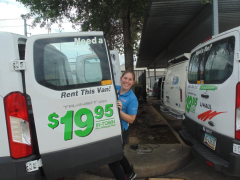 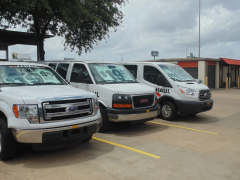 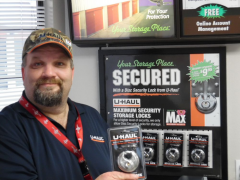 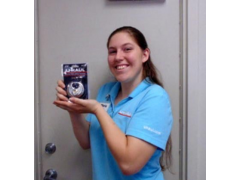 I completed the process with the self pick up service and the helpful agent Virgil was there to assist me throughout the process. The truck was ib excellent condition

Got my reservation through the website for a 10am timeframe from a Uhaul dealer half a mile away from me. Needed to switch it to 1:00pm so I contacted corporate the same day and they said it was fine and I could pick up the truck no problem at 1:00pm. I show up the next day at 1:00pm and the local Uhaul pick up office told me they switched my location to one that was 30 minutes away. Of course corporate never told  me that bit and now I'm late one day due to the distance and got charged an extra day. Got charged obviously way more miles due to distance as well and to top it off the guys that packed my furniture pads didn't count correctly and got charged for missing pads.Worst experience with Uhaul.

Whoever is reading this, I hope your sitting down, because this is going to be a bumpy f**cking ride. First, just getting the pods down to Houston was an issue and the transition from Door-to-door no one knew what was happening. Second the delivery. Don't even get me started. I was moving into my new place on the 7th, I took a day off of work. I scheduled this weeks in advance, you would think there would be some sort of preparation for this. Well you would be wrong. There is literally NOOOOO communication from corporate to the ware house - at one point (after scheduling delivery for the 7th, and confirming with corporat) the warehouse told me my pods were scheduled in for the 10th??? Secondly, then The ONLY driver in the houston area - apparently - was taking off for the forth of July... on the 7th?? It was a bloody disaster trying to schedule these things and the warehouse staff were NOT helpful saying "well I have no idea when we'll get your units out". Anyway the driver was great cause the boxes got in early on the 6th and she delivered them. Schedules?? Who needs em, am I right, Uhaul? My last, and perhaps final complaint (?) is when the boxes were dropped off, the bolts were still on them!!!!!! (Little known fact: and unbeknownst to me Uhaul bolts your POD doors shut while you are not using them). It took me 4 HOURS to get in touch with someone to figure this out for me. 4HOURS. Let that sink in. She was a lovely supervisor at corporate. I took a day off of work to move, and I couldn't even move because uhaul didn't bother creating a driver checklist to ensure that the bolts are removed from my PODS. The supervisor credited me $50 whole dollars back! On top of that flattering $50 credit, I had the oppurtunitty to go to Home Depot and pick up my very own wrench to remove the bolts from the pods. It was such a wonder plus experience, surely no other patron will feel this level of corporate commitment from Uhaul. In short I was "given" $50 to buy a wrench to remove a bolt Uhaul left on, soooo not quite a credit, huh? For a move that cost well over $2000, I expected more from uhaul. They have somehow managed to fall so far from expectations that I dare say, I will never use them again. I am a consultant, and will warn my colleagues against them in hopes I can save someone the pain I went though.

So I've been trying to be better about what I eat. You know, healthier? Buy some chicken, grill it, make it healthy? Okay Belly, we get it. But what does that have to do with a storage place? Well, since I got myself a brand new propane grill and a brand new EMPTY propane tank, I needed to have the tank filled up. And this particular U-Haul location offers propane fill up.As I approached this location, there's only a small area between the street (Wespark) and the gate. I pulled in, toward the gate and noticed that there was NO parking space available outside (They have four spots: three for everybody and one disabled parking.) I pulled up toward the gate, step out of my car so I could use the intercom (No, you can't pull up all the way to the intercom so you can just roll your window down) and press the button. And as soon as I pressed the button, the man who is manning the register (the man that you see in the pictures, yo) yelled through the intercom "Just get in, the office is right here!!!" Well, I couldn't just leave my car right there by the gate, can I? So I pressed the button again and said, "there's no parking space out here." And again he responded with "just come in! The office is right here!" Confused about the parking situation, I just stood there and he finally came out and pointed for me to park behind another parked car, effectively blocking that person if he/she were to leave.Anyway, I parked and opened up my trunk and pulled out my empty propane tank and walked into the office so I could tell them that I needed to fill it up. I stepped into the office and waited maybe about 10 seconds when a woman (not the one in the pictures) told me that I couldn't bring my propane tank into the office. And as soon as she told me that, the man started yelling at me and told me that if I had wanted to fill up the propane, I should have told him earlier. I tried to explain to him that I never had the chance to say anything to him over the intercom before he started yelling at me to get in. Long story short, he just yelled at me, walked from behind the counter, grabbed the propane tank and walked out toward the golf cart outside. I followed him out, but at the same time, another customer that had been in there was saying that she was going to leave and that I was blocking her car. NO KIDDING! I waited for her to leave while the man yelled at me again, "Are you coming?!?!" And I told him that i needed to move my car. So he proceeded to drive toward the fill up station while I moved my car.I walked toward the back where he's finished filling up my tank. He put the tank in the golf cart, I hopped on, he drove back to the office and I paid. He also told me that next time (I don't think there will be a next time for me), I just have to tell him over the intercom that I wanted propane and I can just drive to the back and he'd meet me up. Well, if he had let me speak, I think I would have told him that. But whatever, I just wanted to leave at this point. I got home and I was going to attach the tank to my grill and noticed that there's a sticker on the tank that tells me that my tank would need to be "purged" before it's filled up. Also, the sticker states that after the tank has been purged, the person who performed the purging was supposed to remove the sticker. Well, since the sticker is still there, it's obvious that he didn't even bother to purge my tank before filling it up. I'm not going to explain why purging the tank is important, but if you do a quick Google search, you'll see why.So that's my experience at this U-Haul. It doesn't look like other people had it better than me. Now it's your call whether or not you want to come to this location. But I wish you had a much better experience than me. I mean, this is probably the first time that I was yelled at by somebody who's supposed to provide customer service. And this was before I even said or did anything. NEVER AGAIN.

If you're going to go to this location make sure you go early. The parking area is the most inconvenient place in the world and the idiots will park in front of you regardless of if they see you waiting in the car or not. It's not safe for women. I don't have anything against day laborers; however, there is one too many out there. As soon as you get close they all come running. One guy was so persistent I expected to have words or more with him. This location should be closed.