Moving Soon? ...Apt,Home, Office, Loading or Unloading, Pods or Uhaul, We doit All for our Hourly rate, We start our charge from the time we arrived to your place until the time we finish unloading the last piece of furniture! We take a part furniture or Beds and put them back together for our hourly rate....our only extra charges-$50 upright piano $50 Gun Safe or Fire Proof Gabinet and $49Diesel Trip charge(inside610Loop)...We will protect your Furniture with blankets and Plastic wrap ...Call for a free quote or visit our website www.mymover.com and email !

Established in 2010. we been serving houston to  Austin, san antonio,dallas to houston all around texas, family own, 15 years experience in the moving business. 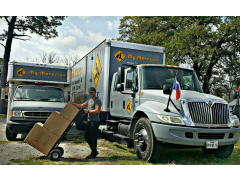 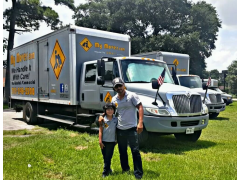 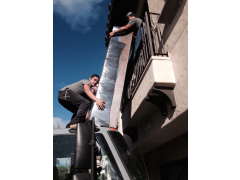 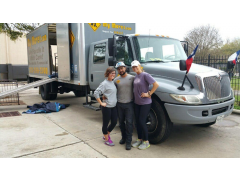 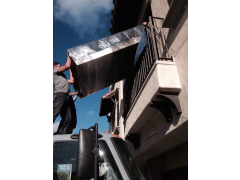 Reviews of My Mover

These movers did a FABULOUS job. My boyfriend and I were moving in together and I called them two days before the big move. They collected furniture from both our apartments and delivered it to the new place. They worked quickly and were extremely professional. I am so thankful that they were available on such short notice!! I would ABSOLUTELY recommend them to anyone looking to move in the Houston area.

I had a bad experience with this company. I trusted positive Yelp reviews but I am not happy with the way they handled my move.I used them to load two Upack pods for my move to California. I haven't opened my boxes yet but so far I have identified three broken items. They were very quick but their speed heavily compromised how careful they were with the stuff. It could potentially be a Upack shipping problem too but my impression from their work and also opinion from people who unloaded the pods suggests that this is primarily a loading issue. They came 1.5 hours late for a first move in the morning.I hired them because of their good reviews and wanted to make sure that pods are loaded by professional movers so that minimum damage would happen to my stuff. However, their unprofessional work was even evident before my stuff was shipped. They didn't pay attention to anything while loading the pods. They stacked heavy boxes on top of light fragile boxes, and even while my boxes had multiple arrows on each side showing the top side, they put some boxes upside down! Most of the time I was upstairs giving them instructions for the things that I planned to ship so I saw the situation when they were almost done with loading.I had two pods and only 1/4 of the second pod was loaded so they had enough space to do a professional work but they fully loaded one pod carelessly and most of the stuff that were broken were on the fully loaded pod. Fortunately I used bubble wraps, air bags, and peanuts liberally in my boxes and so far I have only noticed one broken item inside the boxes that I have opened. The workers that unloaded my box in the destination were also shocked by how carelessly they have done the work. Also, the plastic wrap they used was very low quality and got easily broken even when they were wrapping. They basically wrapped some items to show that they had wrapped them and it didn't protect the items at all. Dealing with broken wrap also increased the time they spent wrapping.They also behaved very unprofessionally when it came to dealing with my belongings. I had a couple of extra unused Uhaul boxes and they took it with themselves without asking my permission. Finally, I submitted the invoice to my company for payment and they asked for a receipt too but since they only accept cash, I didn't have anything else. I contacted Jaid multiple times but he never took the call. I used another phone to contact him and he took the call but he said he was having lunch with his kids and he would call back which didn't happen. Finally, I texted him a detailed request for emailing a receipt but he said he can't do anything beyond the invoice.UPDATE: Jaid contacted me after seeing this review and he believes that he has done a professional loading and all the things that have happened are because of the way items were shipped by Upack. He also agreed to send me a receipt soon but he could have dealt with this situation earlier. I added one star because he took the time to contact me although his terms of contract doesn't cover any loss.

Moving is stressful enough without lackluster (see: terrible) communication.I had a good friend recommend My Mover and my wife and I had previously had a bad experience with 3 Men Movers so we figured why not give them a try -- especially given all the glowing Yelp reviews. Unfortunately, we weren't so fortunate.As Aaron S. mentions they're almost impossible to contact. I left 2-3 voice mails and sent 2 e-mails before I finally got Jaid on the phone. Nobody ever bothered to return the initial voice mails or respond to the e-mails.After I got off the phone, I was asked to text all of my information. I text all of the information that I'd previously included via e-mail. In return, Jaid sends me a screenshot of a business card.The following day, I confirm and ask for a confirmation e-mail. I'm asked to please send all the information (again) to another e-mail address. I mentioned that I'd already submitted using the form on their website and they follow up with a different e-mail address to send my information too.Red flags abound at this point, but my buddy said they're good and the reviews are good so this experience must be an anomaly. I persisted.I sent all the information on April 5th. Nothing.On April 10th, I send another text and e-mail asking for confirmation. Nothing.This is not very reassuring. At this point, I decide I'll make one more call before going with another company.The following day I'm able to (finally) get someone on the phone who confirms my move and e-mails me a confirmation that includes a picture/infographic of sorts that explains their rates, process, etc. I've included... it's quite a mess. I almost asked for $25 off my move to upgrade that graphic for them in PowerPoint.Our move is finally confirmed. Yay. This is where they shine, right? Sadly, no.The day of the move, we wait until 9:15 (for a 9:00am scheduled move) and nobody has arrived. I call Jaid and he tells me he's not sure what's going on, but he'll call the crew.After about 15 minutes he gets in touch with the crew and evidently they had trouble unloading someone the night before so they went to do that move first instead. No phone call, no e-mail, no head's up... nothing. And they knew it was an issue the night before.At this point, this is completely unacceptable and I'm regretting the decision to go with My Mover. We scheduled the 9am move because we had another event at 3pm (and we we'd done a lot of the work ourselves and knew the move wouldn't take long).I begged for an ETA and after awhile got a response that Jose, the driver/crew leader, would call me in to minutes. After a half hour I hadn't heard a thing (surprise) and asked again.The response is that they'll be after 1pm. Great, now we're definitely missing our afternoon event.It's 11:00am at this point and so we start moving ourselves. At about 12:40pm, we look up and say, "Well they said they would call and let us know when they were on the way, but that seems unlikely so we should go back (to the apt from the house we're moving into)."We arrive at 12:55pm and then, at 1:00pm, with no warning, the moving truck pulls up.Once they finally arrived, they offered an insincere apology and no explanation for the delay. I asked multiple times and was finally told the vague story about the previous night's move. One of the movers had sustained an injury and they did proactively ensure that another team member met them at the location so that we'd have three guys. I very much appreciated this.The move itself went pretty well. The team was very fast and efficient, which did include wrapping all of our furniture. In addition, the guys were friendly and respectful of our furniture. We are missing a couple of pegs from a bookshelf (which happens), but overall, the move itself went pretty seamless.In addition, their hourly price and trip charge are both less expensive than the majority of other local Houston movers that we received estimates from.[SUMMARY]: Despite the fact that movers were quick, efficient, and less expensive than their competitors, the terrible communication was unredeemable. Moving is an inherently stressful experience and it was exacerbated by the utter lack of communication (throughout the whole process) by My Mover. If communication and timeliness doesn't deter you, they've a very capable moving team, but I can't endorse them in any way.- Are they even moving us?- Are they ever going to send confirmation?- Why are they not here on time?- When will they actually show up?[UPDATE 7/7]: Jaid reached out via e-mail to apologize for my experience. He took personal responsibility for the lack of communication, acknowledging that he was formerly a very talented mover and that moving, not business, is his expertise. I have a lot of admiration for people courageous enough to go out on their own and very much appreciate Jaid trying to resolve our lackluster experience. His team *can* move furniture.

They did a wonderful job and super efficient! They call when they are close by which was nice because most don't. They literally take everything you ask them.. even when its not in a box. We were surprised how fast they moved. Literally one of the best moving experiences I've had. I will be recommending them to all my family and friends.

We're very happy with this company! They moved all of our boxes and furniture very carefully and efficiently!! They're methodical and have great teamwork! They broke down our bed and put it back together. Nothing was missing and they made sure everything was in its correct spot. There were no marks or scratches on our doors nor walls! Like I said, they're very careful! They also wrapped our furniture and delicate items in the moving blankets and shrink wrap.