Established in 1972. Beginning in 1972 out of Joanne and Steve's railroad apartment on West 96th Street, West Side Movers has grown to become a neighborhood staple for moving, storage and supplies. For over 44 years West Side Movers has focused on offering top quality moving services to residents and organizations within the borough of Manhattan and beyond. The team consists of veteran movers who work together closely all year round, and whom are capable of meeting a wide breadth of different moving related needs. The Moving Store, the original store for moving boxes and supplies, is the retail arm of West Side Movers. Many neighbors recognize their former store front at 644 Amsterdam Avenue (1980-2010) and their present store front 963 Columbus Avenue (2011-present). West Side Movers is directed by second generation Owner and President Matt Fiore, and are proud to remain a family owned full service moving company. 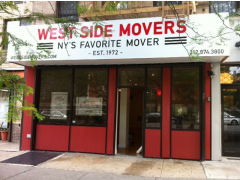 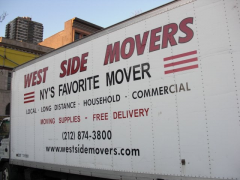 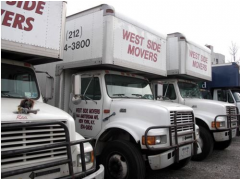 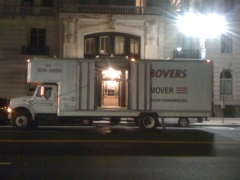 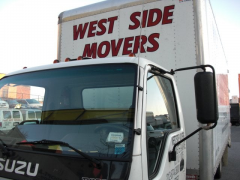 Reviews of West Side Movers

I decided to move for the first time in 12 years, and didn't know where to start. A co-worker referred me to West Side Movers, and I'm glad he did! They were OUTSTANDING. Reggie the foreman was awesome. Extremely professional, uber-organized, insightful, and friendly. He rallied his team (Stu, Luka, Stevo, Pavel, and Blazo) into an amazing orchestra of efficiency. I was blown away. This was one of those very rare "wow" service experiences. If you're looking for movers with incredible work ethic, positive "can-do" attitude, and friendly/efficient service then check these guys out. Matt the president did the prelim assessment of my apt before the move, and mentioned it's a multi-generation family-owned biz. Fantastic local company. Thanks Reggie and team for taking the stress out of my move. You're the best!

I called to get a quote for moving small studio apartment items. They asked me to email the list of items which I gave be list over the phone. I received a quote which was by far the most expensive quote than competitors.They work on hourly rates of $110/hr and they ask minimum 4hours of booking which is~$440minimum. They also charge $20 for gas. They will not assemble/dissemble regular furnitures. The customer service is really bad. When I tried to negotiate the pricing by citing the lower quotes I received from other movers, they literally hang up the phone on me.

I've gone back and forth about this review. I decided on two stars and several bullet points.1. Unprofessional. Other movers have a checklist for you to fill out, to see the size of the move. What I considered a small move, the foreman of our group considered medium/large. Because I didn't mention an extra table and desk. He mentioned more than once that it should be a "four man move" not a "three man move." I understand that now, and I'm sorry, but it's not my job to know the difference. Talk to your office.2. Unprofessional (again). I asked the office a couple of times for a Certificate of Insurance -- required by every coop and condo building in the city. WSM asked me to send them a form to fill out. What? I asked my future building manager for said form and she was very curt in saying that WS was not a "fly-by-night operation" and they should have a COI on file to simply email to her. When I went BACK to WSM, this proved to be the case. But why the extra steps for the customer?3. The movers arrived and, as I stated, the foreman was not happy at all.  Listen. Who here is under more stress today? The guys who just came to work this morning, like usual, or the couple who are MOVING THE ENTIRE CONTENTS OF THEIR HOME TO A COMPLETELY NEW ENVIRONMENT? Don't make me coo and cajole you. Fortunately, the two crew members weren't fazed at all, and just said, "Let's get to it." They were heroes -- older guys with Brit accents. I LOVE YOU. The foreman, again -- no.4. The foreman ALSO was upset about two tall outside iron gates we wanted to move. I moved these in with only my girlfriend to help. We are in shape, but also we are in our 50's. The gates are from New Orleans, and are awesome. Foreman surprised me by randomly slapping on a $100 surcharge for each of them. Because, again, I didn't mention them when I had the convo with the office. (I expected the office to reply with my verbal list of furniture with "I'll email you a list form for you to fill out," but they said, "Okay! See you Monday!") I was already abashed by the foreman's unpleasantness, so I just said, "Whatever. They have to come." Minutes later, one of the crew members walked out to the truck with one of the gates under one arm. A $100 surcharge for that? Um, NO.5. To his credit, the foreman took me aside and said "we started out on the wrong foot," which is what some people consider an apology. (Note: it is not. A real apology requires a first person pronoun, but hey.)  He said he wouldn't add surcharges for the gates, after all, but that they "expect to be tipped at the end of the move."  I roll my eyes as I type this. Of course, you expect to be tipped at the end of the move. And that is at my discretion. You mean you expect something close to $200 in tips. Got it. btw: you're an asshole.6. Said foreman also seemed to think they deserved extra credit for "moving me on a holiday." I laughed and said, "Since when is the 3rd of July a holiday?" He said, "Well everyone else is taking off." The idea that some people chose to make this a three day weekend does not make it a holiday. Yeah.  By now, we really don't like each other.8. Which is probably why he didn't even move anything into the new place. He stayed at the truck and staged things -- which is fine. He did, however, mention "your WIFE" to my husband a few times. I guess he hoped my husband would roll his eyes and mutter "that BITCH." But he didn't.They moved us. They moved us with little advance notice, which I do appreciate. Nothing was lost or broken, which I also appreciate. It cost about a thousand dollars for a one bedroom move. One flight up from the garden apt (oh, that pissed him off, too. I told the office it was the ground floor, but there were stairs up to street level; apparently the office heard only "ground floor." Not my fault.)The move was accomplished. It could have been SO much more pleasant.  The two crew members were awesome, and just went to work and did that impressive thing that movers do. The biggest/heaviest thing we had was sofa bed and a bed. And the rest, mostly, was street furniture. Which means it was stuff I found while I was walking my dog and managed to get home myself or by calling my husband to say, "TREASURE ALERT!" There are more professional moving companies with a better attitude. I won't hire these guys again. And WSM, if you read this, understand that this could have gone a LOT better if the OFFICE had nailed the COI and the manifest in a simple, non-subjective way. Let's all agree on what "small" means. And movers, when you arrive, know that the home you are walking into is full of stressed anxious people who have been undergoing many hurdles and expenses for the past few weeks -- and they see no end in sight. You can really make a difference. My birth family moved a dozen times as I was growing up.  I STILL remember the cool guys that came and took over.  Sadly, I'm sure my mother still remembers only the jerks.

I had a team of Koi, Julio and Luka. These guys were absolutely the best. Really friendly, very fast loading and unloading, and they transported things with incredible care. We had a whole apartment's worth of stuff going three hours out into upstate NY, up three flights of stairs, and not one thing got broken. Nothing. Also Koi gave me recommendations for where to get Ramen in NYC which was awesome. I would definitely book them again, or recommend them to anyone, especially if you get this team.

We recently used West Side Movers for two move, one from Brooklyn to Manhattan and the other from Brooklyn to Connecticut.  Both moves went so smoothly.  The crew (with Alex as the lead) did a great job, and were extremely careful,  From the initial estimate from Matt to the move,  I couldn't ask for a better moving company.  They are not your typical moving company.  I would use them again and recommend West side movers to anyone who is looking for a smooth and easy move.