Packing Bees should be your company of choice whether you need help packing or moving.- Need help organizing your garage or storage unit? — Feeling lazy to pack your huge or small home?- Home renovation? Sold your house?   — Need help Loading/Unloading your rental truck? — Need to pack or unpack a pod that sits in your driveway?- Tired of looking at all the same furniture layout in your house? Then pick up the phone and dial 619-892-7836 and book an appointment now.

Established in 2014. If you ever moved you know how boring packing stage can be. Here at Packing Bees we gathered extremely patient and organized people. We guarantee that you will be happy with the results simply because we love what we do.We master in packing trucks, pods, containers and storages; furniture assembly; household and commercial packing for moving and storage; emergency packing; loading and unloading etc.Very often you may save money hiring us for your long distance move. Call us to find out how.We worked very hard to create a company that you can rely on with all of your moving and storage needs. 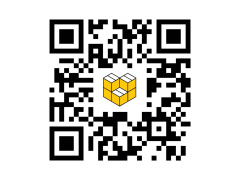 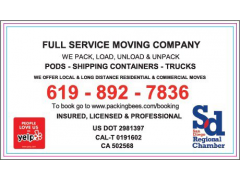 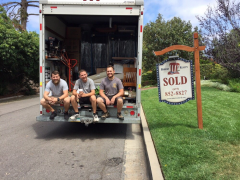 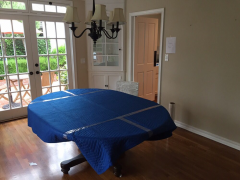 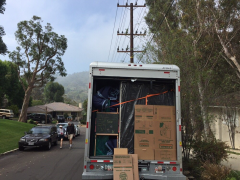 Free online moving quote calculator is light and easy-to-use, not requiring any specific knowledge from you. Everything you need is to specify the total size of your belongings, starting and ending points of your move, using additional services like packing/unpacking, etc. and send the request. Considering all the data you entered we make the accurate and precise calculation of the cost and delivering time and will provide you the results in 5 minutes. You can see information about other local and long distance moving companies in San Diego in our catalog.

First of all when I contacted Packing Bees Movers, they answered their phone!  I expected like many other moving companies to have to leave a message and wait for a return call.  I was impressed with Dimitri and his way of explaining what to expect on a move with short notice.They arrived on time and needed a full 8 hours to complete my move.  Max and Branko were courteous and professional.  They worked hard and never sat down once.  Both men moved a complicated, large amount of stuff and packed too!We asked that they move room by room so we could get things somewhat organized at the new location and they delivered just as we asked.  Besides being hard working, very organized and good at moving, they had some very good ideas for us on how to set up the furniture.  One suggestion was that the bed be placed where the sunlight that comes through the window would not be in our eyes.  We ended up with a nicely arranged bedroom because they were creative and had such great tips and ideas on placement of furniture.Thanks again for helping us with the move and letting us ask for difficult items to move and not once complaining about it.  We truly appreciate it and would call you again if needed.We recommend using packing bees to anyone with any type of move.  You're amazing and we so much appreciate it.  Now let the unpacking begin . . . . . . . . . . . .

We all know moving is stressful and time-consuming. That's why I decided to hire professional movers this time. It did not go well.Everything started out ok: Dmitry (sp?) answered my call, gave me info over the phone, and came out to give me an idea of how long things would take. He estimated 5-6 hours (I remember him giving this timeframe for the moving itself...I needed to know because I was having cleaners come in after the moving was done...he says he was giving me a timeframe for packing). I had several friends help me pack. We got a lot done but I decided to pay for the extra help because I was short on time. Two men from Packing Bees finished the packing for me. The next day, four Packing Bees movers came with their truck, packing plastic, and blankets to protect the furniture.  FIFTEEN HOURS and two truckloads later, everything had FINALLY been delivered. Note: I moved about 4 blocks away, we moved from a 1600 sf home AND all the garage and attic items had already been emptied two weeks earlier. Packing Bees started at 8 am, I had the cleaners come at 2 pm, thinking the moving would be done, and I had plans at 7 pm to celebrate the move. But Packing Bees were moving my stuff until 11:30 at night!!!! I really can't explain why it took so long. They seemed to overwrap (does a child's step stool really need sheets and sheets of zplastic protecting it?) and spent a lot of time putting things in precise places on the truck. (Remember, I was moving 4 blocks.) They were surprised they had to move a piano (Dmitry was aware) and they took a long time taking it apart. And because they charge by the hour, I was watching my money fly out the window. By the time 7 pm rolled around, I started to panic. I finally started reaching out on social media to ask for more moving assistance, and several friends and neighbors came to my rescue. We then had 4 Packing Bees movers and 4 of my friends working to get it done!!  At 8 pm, I realized my kids needed to go to bed...their first day of school was the next day...and since the beds weren't put together yet, I put mattresses on the floor and had them sleep that way.  By the time the second load had arrived, the poor crew was as exhausted as we were and started to just pile up furniture and boxes on the back patio. They weren't even asking where things go anymore. It was clear they just wanted to get it over with. The movers needed their blankets/pads back so I had to unwrap everything from the furniture myself so they wouldn't have to come back for the blankets the next day. I guess I was trying to make things easier for them, but it made it harder on me. Basically, I felt like I packed and I moved and I unwrapped and I dragged boxes and even 5 days after hiring professional movers, I still have to put beds and furniture together and move boxes to the right places before I can even unpack!  PROS: Dmitry (sp?) is the man in charge...he is very personable, very nice, very accommodating (he fit me in on late notice), and strikes me as being honest. Brank was the staff member who led the packing and moving teams...also very nice, very professional, very helpful. In fact, I had warned him about the fragility of a set of very thin glass frames set in a tri-fold photo screen, and after his workers had wrapped and protected it and were carrying it to the truck, Brank HEARD that it had broken, and unwrapped it to discover that, yes, several of the glass pieces had broken. He contacted Dmitry, and assured me that it would be replaced. The additional crew members were patient, hard-working, and quiet. CONS: It. Took. Forever. Stuff was broken. Beds weren't put together. Many boxes they packed were unlabeled. Furniture and boxes went to the wrong rooms. I'm going to have to get additional help to put together beds and to move furniture and boxes to where they need to go. It's been 5 days since the move and Dmitry has not responded about my concern with how long it took (he said he would speak to his crew and get back to me) nor about the broken photo trifold (which they still have). All in all, if you are moving a long distance and have lots of valuable antiques that you want protected, and if money isn't an issue for you, so you can pay by the hour no matter how long it takes, then you will assuredly be happy with Packing Bees. Unfortunately for me, I am a single mom with two school age kids who just wanted some help moving a few blocks...and it ended up costing me over $2000 and was one of the most stressful days of my life, to the point of tears.  The next time I move, I will NOT be hiring Packing Bees or any other professional movers...I will rent a UHaul and pay some neighborhood teenagers to help me. My bet is it won't take 15 hours.

I have moved over 20 times and have used movers many times; unfortunately my initial experience with Packing Bees was pretty lackluster at first since their movers they sent weren't the most efficient and really had a hard time with our move.So Packing Bees stepped up, took responsibility and stood behind their work and made sure we were happy. They sent us movers for three hours to help us unpack than next day free of charge to make up for it and it was incredibly helpful. They made everything right in my place looks great. I applaud the company for stepping up and making sure their customers are happy. Based on that fact alone I would use them againThis was initially a one star review. Anyone can make a mistake, but it takes a real professional to admit it and make it right. Thank you Packing Bees!

Oh wow these people are by far the most GENUINE and AMAZING people. They are fast and very very nice people! I am sooo happy to have used this company for my first time move. Thank you thank you to Bojan & Pavel

Packing Bees is an absolutely fantastic moving company and I give them my highest rating and referral!Dmytro was professional, courteous, organized, and helpful. Branko and the moving team continued this the entire process of moving my business offices. We all know that moving can be very stressful and you can make it easier by hiring Them...