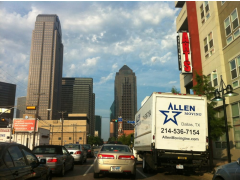 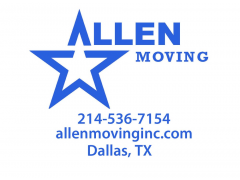 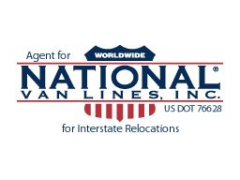 Allen movers was professional, efficient, and affordable. The guys communicated well, were very polite and took very good care of our furniture. We changed movers the week of, and this company beat the previous mover's rate and still did a fantastic job! I would recommend them to friends, family and anybody else!

I booked theses guys the day before.  Only place that had an opening at the last second.  Wow were the three guys professional and so careful with my stuff.  They asked all the right questions and within minutes I knew I chose the right moving company.Thank you again for the great move!

We contacted Tom Allen at Allen Moving to help facilitate a local move - we let him know that we were moving from a 2-story 3,000sqft property to a 2-story 3250sqft property approx 20 miles away and were looking for a flat rate quote.  We asked him to come out and view our current home, furnishings, etc so that he could provide an accurate quote.  He came out two weeks prior to our move, and promptly sent back a quote that aligned with our budget and needs.   On the day of our move, his crew showed up and immediately requested payment.  I told them that we had agreed payment would be made upon completion of the job and in cash but they said it had to be paid upfront.  I called Tom, asked him what was going on, he said he wanted to collect upfront and I told him that wasn't what was discussed and I wasn't paying cash until the job was done.  He said okay, we hung up, he called his guys back, told them to get to work.  They begin breaking down furniture, loading boxes, and packing the truck.  During the process, they show me a couple of broken slats for my master bed and mention if I grab a couple on the way, they can put the new ones in when putting the bed back together. After 6 hours, his crew completed the loading and, despite being instructed by Tom to follow me, refused my request to lead them to the new house, saying they needed to stop and get lunch and would just meet me there.  I drew them a map, gave them the address, and went on a head.  2 hours later, when they hadn't shown up, I called Tom to check in - he immediately got upset with me saying I was supposed to let them follow me, to which I explained that I tried but they said they weren't going to.  He said he would call them and call me back - which he did about 20 minutes later - saying that they had trouble finding gas but were on there way.  An hour after that (3 hours total) they show up - the crew leader makes a comment about eating a sandwich at the gas station and getting sick and starts to unload.  About 15 minutes later he comes over and says "I know we said you would pay after we're done, but my boss is saying I have to collect now or we have to leave" - I ask him to let me talk to Tom and step away to call him.  Tom answers and immediately says he's done playing games, to pay his crew or they're going to leave.  I attempted to question what had changed from our previous agreement and he starts yelling, cursing and making threats over the phone about having his guys take my stuff then hangs up.  I walked back over to the crew leader, hand him the cash, and say let's just get this over with.I go to leave to pick up slats for the master bed and a dryer vent hose when I get a call from my wife 15 minutes later saying that they're refusing to take anything upstairs and are just putting everything in the garage and in the downstairs entrance of our house.  I call Tom again and ask what's going on, why they're not completing the job, and he says "because I told them not to, you wanted to f- around with me, so this is what happens - you're lucky I don't have them just dump your crap in your yard like I should."  He then proceeds to spend the next 3 minutes cursing at me, and attempting to have a "who's the bigger man" fight over the phone as I proceed to ask him to come to the property and discuss this in person.  At this point I've had enough and go back to discuss with the crew leader, who says he can't go against his bosses orders or he'd fire him and he needs the paycheck.  I offer to pay them MORE to finish the job correctly but they refuse out of fear of their boss and loss of income.  I say okay, I'll do it myself, and let them finish unloading the truck to my front door where my family and I take it and put it where it belongs and start putting it back together.  During this process, I hear a loud bang from the truck and walk over to find them bent over one of my pieces of furniture with a stain pen trying to cover up damage they had caused.  I told them they needed to stop and ended up having to spend the rest of the next 3 hours watching them at the bottom of the ramp to ensure they weren't trying to conceal any other damage.The next day I went around the house inventorying everything and assessing for damage and found nearly every piece of furniture had damage, some significant damage, including our $1100 washer and our $900 dryer which had gouges and deep scratches, as well as our refrigerator and our slide-in double oven which were both dented.Needless to say, I have notified the BBB as well as their national van line partner, and will be filling a damage report through my contract.  My experience with Allen Moving could not have been worse, and in the numerous moves I've had over the last 15 years of my adult life, I have not once had a worse experience with an owner or a company.  I have never been yelled at, cursed at, insulted, or degraded like Tom choose to do.  I highly encourage you to look elsewhere for movers

Just used these folks for a small office move. The guys showed up on time, and unlike our previous choice of movers, hustled to get it done quickly, did NOT scar the walls when bringing in the furniture, were friendly, and reasonably priced.  I highly recommend them!