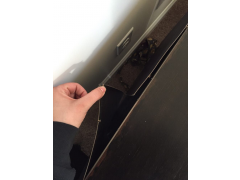 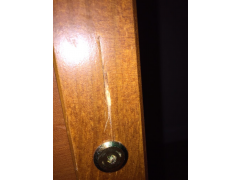 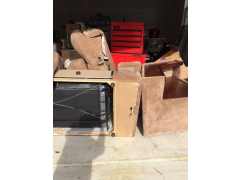 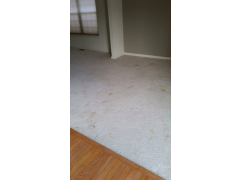 DO NOT USE THIS MOVING COMPANY!!!We were told that this moving company was excellent by our neighbor. That may be the case on average, but we definitely got the "B" team for our move. Joe Jr came out and sold us on their service, claiming that they will take the utmost care with our belongings, and protect our former and future home during the process. He said that they cover the stairs and the hardwood floors. No.The team showed up and reeked of cigarettes. One guy asked if I could make him some coffee. I gave a tour of the house, and many things that Joe had previously agreed would be no problem, this team was telling us that they would not touch! They protected/covered NOTHING!! They draped a blanket over one part of the stair rail and dropped a blanket at the doorway, and that was it. We have white carpet and it had just rained.A couple hours into the move and a guy disappeared into the truck, apparently after dropping something on his foot. Most likely this was a result of one of the myriad of damaged items that arrived later. We were promised a team of 4 and quoted a price. Several hours later I called to inquire about why we only had 3 guys working this whole time, and was then met by a moody Joe Sr, who said not to worry about it, someone was about an hour away. When I asked about compensating for the lost time, he seemed taken aback that it mattered. Hi, but if you have less guys, won't it take longer???This was the most unprofessional moving team I have ever seen! My wife called me from our new home and said that she was about to call the police, because two guys were about to get into a fist fight. I came down to the new house with my wife in tears. One guy was playing on our pinball machine when I got there, and he said that he thought it was cool. Awesome!I surveyed some of the damage that was already taking place. We had just walked the brand new house with the builder, so it was disheartening to had so much damage done in the first hour of owning our home. Nothing was covered on the hardwood stairs, nothing on the floors or carpet for protection, no furniture protected in the truck during transit!My wife had now gone to our old house and called to tell me that they were now tracking mud all throughout the house. She told me all of the things that they refused to move. At this point I would liken it to a root canal, trip to the DMV or IRS audit, where you just want it to be over with. I asked the guys to wrap it up. We got a bill about $400 more than we were quoted, and it almost seemed like a bargain just to get them out of our new home and stop destroying our things.Fast forward to a call to the owner, Joe Sr. One of the least customer friendly people I've ever dealt with in a customer service industry. He had my wife in tears within 15 minutes. In the end, he said he would fix everything. It has been over a month now, and we continue to find broken belongings. The things that we have pointed out as broken and damaged have been taped, touched up, and glued. Furniture markers do not fix our issues. Not to mention, we have yet to be compensated for being overcharged, and losing our deposit from the mud they tracked throughout our other place. Damage to furniture, high end refrigerator, glass, walls, floors, doors and artwork is still unresolved over a MONTH later. Promises to return keep coming along with excuses.Avoid at all costs!! Check out our pictures, and there are many, many more. The broken promises are the hardest to swallow, as we shared with Joe a past experience that we wanted to avoid. Well, Fry's somehow managed to make that terrible experience seem exceptional. Way to go!