Established in 2000. Family owned and operated since the Company's founding in 2000. 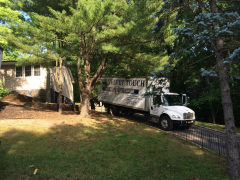 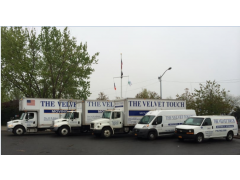 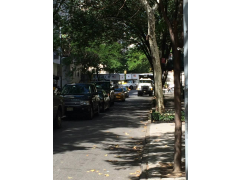 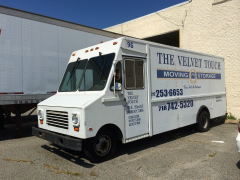 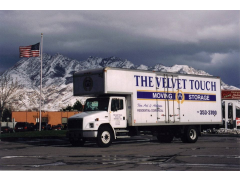 Reviews of The Velvet Touch

I used TVT for my first moving experience and they made it so effortless and pleasant!  The crew arrived on time and very prepared. The men were so so sweet and helpful. I live in a 6-floor walk up and they handled everything with ease and no complaints!  It was such an easy experience and that's just priceless.  Pricing was very fair too. I've recommended TVT to many friends and they've had great experiences as well.  Big thumbs up!

Wonderful mover, like working with friends. Operations manager, Marianna, very professional, responsive and friendly. Crew did a great job, carefully wrapping and unwrapping artwork and furniture at delivery location. Everyone has a good attitude, makes it much easier. Did 3 moves from Manhattan to other cities with them and I couldn't be more satisfied!

Not a budget moving company, but you pay for what you get - Quick, careful and professional. Would certainly use again!!

The Velvet Touch team is amazing!!  I called the office about moving and was immediately scheduled for a Free estimate.  After meeting with the estimator, which I believe the gentlemen's name was Stas mostly all of my questions and concerns about moving were answered.  He reassured that the move could be done within the limitations of my building.  My move happened the day before Thanksgiving, which I was extremely worried about due to  the traffic conditions in NYC, but to my surprise they arrived @ 9:15, which my job was scheduled between 9-10. My move went surprisingly well. The team of men were professional, courteous & hard working.  The Velvet Touch moved all my items with care & ease.  Thank you for taking care of my move and easing my stress level!!! I would highly recommend The Velvet Touch to anyone that has to move! Thank you again for everything.

I'm so angry about the abysmal service I received from this company given the amount of money I paid them, it's actually difficult to write this review.  But I want other people who might consider hiring this bottom rung mover to be able to avoid the experience I had.We were planning a move from the Upper West Side to San Francisco, and we were moving pieces of furniture, artwork and carpets that we had chosen very carefully and paid great amounts of money for.  I'm talking about things you wait years to come up at auction and then pay very high prices for because of their rarity and condition.  Obviously, no ordinary mover would do in this circumstance, so I spent some time calling around to come up with the best mover I could find, without regard to price.  Long story short, I hired Velvet Touch.Once everything was unloaded on the west coast, our appraisers calculated we had  sustained over $25,000 worth of damage.  Some of the damage was caused by Velvet Touch, and some by the (even worse) outfit they subcontracted the cross-country move to.  Examples: 1) A George Nakashima cabinet, in mint condition, which we purchased from the original owner, was wrapped in a wet blanket.  By the time it reached us, the finish was destroyed.  If you collect furniture, you know the important difference between a piece with a restored finish and one with a perfect, original finish.  2) A large monoprint tryptich was also wrapped in a wet blank.  It arrived completely covered in mold.  3) A brand new, perfect condition grand piano with a high gloss finish was recorded on the inventory as "scratched, dented, having abrasions...", but all this was done using tiny little codes that we never noticed.  Until part of arrived with a bashed in corner, and they were able to refer back to the inventory list to say it was already damaged.  They literally recorded every leg, the piano lid, the bench, the foot pedals, and the piano itself as being damaged.  A sleazy way to get out of being responsible for damage, if in fact it happens, which it did.  4) Our entire record collection never arrived, nor was it recorded, so they can avoid responsibility for that.  5) Our large Poltrona Frau armchairs were dragged, eroding the feet.  6) Numerous pieces of veneer were missing from various mid-century cabinets due to improper packing.  On and on.  So now, fast-forward to today, more than two months after our things were delivered and we notified Velvet Touch about the damage.  I won't go through the numerous evasion and obfuscation tactics one by one, but suffice it to say these people will point the finger at anyone else, including US, to avoid any responsibility for all the damage they caused.  If I had paid the normal $3,000-$5,000 cross-country move cost for a household of our small size, maybe I could understand having to eat some of the damage.  But for over $13,000, no.The cross-country mover they subcontracted to was even worse.  The nightmare began when they insisted, against our advice, to pull a too-large truck into our narrow driveway, snapping tree limbs and damaging one tree to the point I had to have it removed ($800).  Then, putting things on their sides that we asked to remain upright, ripping moving blankets off things so fast they snapped veneer....it was heartbreaking to watch all our precious things get treated like junk from Ikea.  And then Velvet Touch has the gaul to tell me that I chose these people!  I had never even heard of them -- until, of course, I looked their reviews up on Yelp.  You guessed it.  Just as bad as Velvet Touch.  I can only imagine that this other company pays a kickback to Velvet Touch, because there is no way their crude service could ever cost what we paid.So, after Kimon (the owner of Velvet Touch) tried to convince me on the phone that he was going to "take care of us," I harbored some hope.  Turns out, what he meant was that he did not intend to have anything to do with our claim, and he was going to dump all the responsibility onto the other mover he sub-contracted to.  Naturally, the other mover only wants to pay 30 cents a pound for damage.  Well, when you have something lightweight and valuable that sustains thousands of dollars of damage, the $6 they pay to fix it doesn't really have much consequence, does it?  So, if you are looking for a moving company that talks a good game and then turns completely away from their responsibility when they cause tens of thousands of dollars worth of damage to your possessions, I heartily recommend you hire Velvet Touch.  Improper packing, poor storage conditions, subcontracting to movers who are even lower quality than they, you can get all of this, all while paying astronomical sums of money for the privilege.  And after they lay waste to your truly rare and special things, they'll make you work like a dog to get a check for a paltry few hundred dollar settlement.Do yourself a favor; hire anyone but these low-lives.